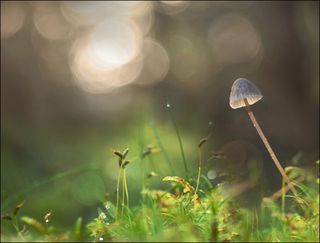 The hallucinogen found in "magic mushrooms" can considerably reduce the depression and anxiety felt by patients who have terminal or advanced cancer, according to new research published in two studies.

Both studies showed that just a single dose of psilocybin — a hallucinogenic compound found in certain mushroom species — could reduce psychological distress in cancer patients, and that this effect was immediate and long-lasting. Participants who took psilocybin reported reductions in their depression and anxiety just one day after taking the drug, and the effects of that one dose lasted for the next six months in up to 80 percent of participants in both studies.

"The cloud of doom seemed to just lift," Sherry Marcy, a participant in one of the studies, said at a news conference held Wednesday (Nov. 30). "I got back in touch with my family and kids, and my wonder at life," said Marcy, who was diagnosed with life-threatening endometrial cancer in 2010. "Before, I was sitting alone at home, and I couldn't move … This study made a huge difference, and it's persisted."

If the new findings are confirmed by future studies with more people, psilocybin therapy might become a new option for treating cancer patients with depression and anxiety, the researchers said. These psychiatric conditions affect up to 40 percent of cancer patients.

"A life-threatening cancer diagnosis can be psychologically challenging, with anxiety and depression as very common symptoms," study researcher Roland Griffiths, a professor of behavioral biology at the Johns Hopkins University School of Medicine, said in a statement. "People with this kind of existential anxiety often feel hopeless and are worried about the meaning of life and what happens upon death." [11 Odd Facts About 'Magic' Mushrooms]

It's important to note that the patients in the study took psilocybin while being supervised by trained staff, and their blood pressure and mood were closely monitored during the treatment session. The researchers do not recommend that people take the drug outside of a research setting.

The drug can also have side effects: In the study, some participants experienced elevated blood pressure and heart rate, headaches, nausea, vomiting, and temporary anxiety and paranoia during the treatment session. However, in the new studies, no serious side effects were attributed to the drug.

Psychiatric research on hallucinogens, including LSD, was conducted in the 1950s through the 1970s. However, this research was stopped in the early '70s after psilocybin was classified as a Schedule I drug,  meaning the drug became illegal and was not considered to have any medical benefits.

But over the past decade, there has been a renewed interest in studying the drug, as the cultural taboo against hallucinogens has declined. (Researchers still need to get special federal approval to study the drug.) And several studies published in recent years have suggested that psilocybin could provide benefits to patients with cancer-related psychological distress or patients with depression who haven't benefited from other treatments.

The new studies were conducted at NYU and Johns Hopkins. Both studies were small; the NYU study involved 29 patients, and the John Hopkins study involved 51 patients. In both studies, the patients were randomly assigned to take either psilocybin or a placebo at an initial session, and then to receive the opposite treatment at a second sessionfive to seven weekslater, so all of the participants eventually took psilocybin. The participants in the NYU study also received psychotherapy in addition to the psilocybin treatment.

In both studies, the psilocybin treatment was much more effective than the placebo. For example, in the NYU study, 83 percent of the participants met the criteria for a reduction in depression symptoms seven weeks after they took psilocybin, compared with just 14 percent of those who had taken the placebo.

The participants also reported that their quality of life improved, that their life felt more meaningful and that they felt less anxiety about death. In the John Hopkins study, 67 percent of the participants said their experience with psilocybin was one of the top five meaningful experiences in their lives, and about 70 percent said the experience was one of their top five spiritually significant lifetime events.

If these results are confirmed in future studies of large and diverse groups of people, "then the classification of psilocybin as a Schedule I drug should be challenged," Dr. Craig Blinderman, director of the Adult Palliative Medicine Service at New York-Presbyterian/Columbia University Medical Center, wrote in a commentary accompanying the study. Blinderman was not involved in the research.

A confirmation of the new findings "would represent a treatment modality unlike anything in psychiatry — a rapid and sustained reduction in depression and anxiety with a single dose of a psychoactive compound," Blinderman said.

Although the findings are promising, "they also reveal large gaps in our knowledge that warrant further research," Dr. Jeffrey Lieberman, chairman of the Department of Psychiatry at Columbia University College of Physicians and Surgeons, and Dr. Daniel Shalev, a resident physician at Columbia, wrote in a second commentary. For example, the optimal dose of the drug and how frequently it should be administered are still not known, Lieberman and Shalev said. Researchers also don't know exactly how psilocybin works to reduce anxiety and depression.

The researchers are planning a follow-up study with several hundred participants to see if they can replicate the results of the two new studies, Ross said.

The studies and commentaries were published in the Dec. 1 issue of the Journal of Psychopharmacology.