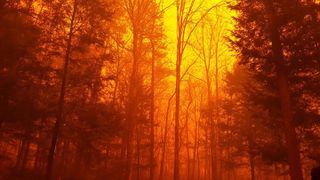 Great Smoky Mountain National Park is closed, and thousands of residents in the nearby towns of Gatlinburg and Pigeon Forge, Tennessee, have fled their homes after a wildfire from the park turned into a rapidly spreading inferno last night (Nov. 28).

At least 14,000 people have evacuated from the two resort towns, and hundreds of structures have been damaged or destroyed, according to the Tennessee Emergency Management Agency. But how did a forest fire spread so rapidly that it trapped some visitors inside a local hotel, filming the flames as the blaze approached the parking lot? [Natural Disasters: Top 10 US Threats]

Most of East Tennessee has been in exceptional or severe drought all summer, said Sam Roberts, a meteorologist at the National Weather Service forecast office in Morristown, Tennessee. At the Knoxville, Tennessee, airport monitoring station, precipitation is down 10.29 inches (26 centimeters) from the annual average, Roberts told Live Science. In the state's Tri-Cities area, about 80 miles (130 kilometers) from Gatlinburg, precipitation is down 9.65 inches (25 cm) over the yearly average. And in Chattanooga in the far southeast corner of the state, precipitation has been a whopping 21.5 inches (55 cm) below average.

"If they don't get too much more rain, this will be the driest year on record for them," Roberts said.

A ridge of high atmospheric pressure parked over the U.S. Southeast has kept rain at bay over the summer, Roberts said, setting the stage for the current conflagration. As of Nov. 23, a small section of the northeastern corner of Tennessee is in moderate drought, while the rest of the state struggles under severe, extreme or exceptional drought, according to the U.S. Drought Monitor. [Dry and Dying: Images of Drought]

Wildfire activity has been above normal in the eastern part of the state, Roberts said, but even without precipitation, firefighting efforts seemed to have controlled the situation in recent days.

"Over the past week or so, things had started to settle down a little bit," he said.

That is, they had until Monday night. On Sunday, a fire started at Chimney Tops, a popular hiking peak inside Great Smoky Mountains National Park. The blaze had spread to around 500 acres in size when a strong front traveling from the southwest brought gusty winds to the area, Roberts said.

"They were getting gusts up there to 40, 50, 60 mph [64 to 97 km/h]," he said. "Because the fuels were so dry because of the drought, the wind just absolutely accelerated these fires at a very, very fast pace."

"Heat rises and so you tend to get fire burning up the slope," Panovich said. "It tends to burn downslope real slow."

Nature offered a slice of relief between midnight and 7 a.m. local time today, as Gatlinburg got between an inch and three-quarters inches of rain [1.3 to 2 centimeters], Roberts said. That precipitation helped dampen ground fuels like leaf litter, but large logs, timber and structures are still hot, he said.

"Right now, things are in much better shape than they were last night, but they are still dealing with some hotspots," Roberts said.

The greatest danger to Gatlinburg and surrounding areas now is another front that will bring in gusts of winds of between 15 and 30 mph (24 and 48 km/h) tonight (Nov. 29), Roberts said. Perhaps an inch of rain will follow those winds, starting after midnight, and this should help firefighting efforts, he said.

"The precipitation will come in," Roberts said. "It's just [that] we're going to have to deal with the winds first."