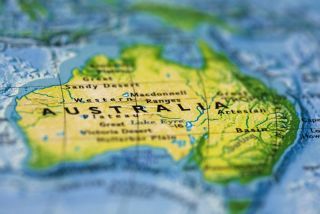 The continent of Australia tilts and shifts a visible amount as the seasons change, new research suggests.

The continental wiggle occurs because of seasonal movement of water around the globe, the research finds.

"That motion causes quite a detectable, sizable deformation in Australia," said the study's lead author, Shin-Chan Han, a professor of engineering at the University of Newcastle in Australia. [Spooky! Top 10 Unexplained Phenomena]

The new findings could help researchers calculate exactly where the Earth's center of mass lies, which could provide a sanity check for ultra-precise GPS and satellite measurements.

Moving with the seasons

Han and his colleagues wanted to get a better handle on how Australia moves with the motion of water in and around the continent. Though Earth looks like a sphere, it's actually a little lopsided, with the distribution of water and continental crust shifting its center of mass (CM) slightly, the researchers said.

"I was looking into ground deformation induced by local climate" in Australia, Han told Live Science in an email. But as he began crunching numbers, he realized that the effect of global water movement (in the world's oceans) seemed to be as important as local water movement (in and around Australia).

The scientists looked at data from land-based GPS stations that tracked minute movements of less than a millimeter. From there, the team looked at data from the Gravity Recovery and Climate Experiment (GRACE), which calculates the change in the Earth's gravitational pull from two satellites in space, and uses that to determine where water is located on the planet. By taking the difference between the two, researchers can calculate where the center of the mass is at any given time, and how much the continent was moving as a result of global effects.

The continent moved northwest by a millimeter during Australia's summer (winter in the Northern Hemisphere), with its northwestern edge lifting up. Meanwhile, the opposite corner of the continent goes up by 2 to 3 millimeters during this same time. Six months later, during Australia's winter, the trends reverse, the researchers reported in the Journal of Geophysical Research: Solid Earth.

Han found that much of Australia's motion was caused by the movement of Earth's water in locations far from the continent. For instance, in the Northern Hemisphere's winter, the vast accumulation of ice and snow up north shifts Earth's center of gravity north. Once all that water melts, it evaporates into the atmosphere and the center of mass migrates closer to the South Pacific. Australia sits smack in between these two areas, Han said.

"Australia is in between two peaks and thus suffers from large extensional stress," meaning it is always chasing the center of mass, in a sense, Han added. Still, "all continents will be affected by this global pattern of mass migration (CM motion) to different extents," Han said.

The new findings also suggest Australia's GPS instruments could be off by as much as a millimeter. While that may not seem like much, it could have impacts in tracking sea- level rise. For instance, deep ocean heights are measured by satellites, while coastal areas are tracked by tide gauges on the ground. Having a better understanding of how the Earth's center of mass migrates may improve how those measurements are reconciled, Han said.

"This is systematic distortion," Han said. "When dealing with [millimeter]-level precision positioning, this should be understood and removed."