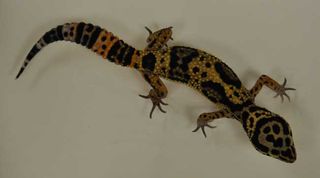 The tail of a leopard gecko (Eublepharis macularius), has a mind of its own. Once shed from the lizard's body, the tail completes complex jumps and lunges.
(Image: © Tim Higham)

It's amazing enough that lizards can shed their tails as a decoy for predators and entertainment for young boys. But a new study of geckos documents an incredible set of acrobatics that these severed tails perform.

Though it might seem as though a lizard loses its tail because it's pulled off, in fact the lizards control the severing, apparently when they sense they're about to become dinner.

The tails exhibit not only rhythmic but also complex movements, including flips, jumps and lunges, after the tails are shed, Anthony Russell of the University of Calgary and Tim Higham of Clemson University report in the journal Biology Letters.

No previous study had quantified movement patterns of the tail by examining the relationship between such patterns and muscular activity.

The new study shows that the signals responsible for movements of the shed tail begin at the very far end of the tail, in a portion of the spinal cord, indicating that there is a control center located there that is likely overridden by higher centers until the tail is shed, at which point its circus-like performing potential is realized.

The findings suggest a model for studying the complex functions of the human spinal cord and the effects of spinal cord injuries.

"Much is known about the ecological ramifications of tail loss, such as distracting predators, storing energy reserves and establishing social status but little is known about the pattern and control of movement of automized gecko tails," Russell said. "What we've discovered is that the tail does not simply oscillate in a repetitive fashion, but has an intricate repertoire of varied and highly complex movements, including acrobatic flips up to 3 centimeters [1.1 inches] in height."

"An intriguing, and as yet unanswered, question is what is the source of the stimulus that initiates complex movements in the shed tails of leopard geckos," Higham said. "The most plausible explanation is that the tail relies on sensory feedback from the environment. Sensors on its surface may tell it to jump, pivot or travel in a certain direction.

Another idea is that multiple networks of neurons in the tail's spinal cord fire at different times, causing these outbursts of complex activity.

The tail tumbles could serve as first-rate decoys.

"When the tail is doing flips and everything else that could enhance the distraction of the predator so the lizard can get away. If the tail moves in a really complex way, the predator would try to get the tail and when it can't get it, would go away," Higham told LiveScience. "Then the lizard could come back and eat the tail." That way, the lizard could gain back energy lost when shedding its tail, which stores a lot of fat, he added.