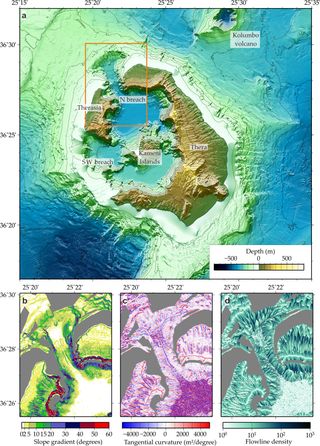 The historic eruption of the Greek volcano Thera in about 1650 B.C. triggered massive tsunamis and led to the end of the dominant civilization in the Mediterranean. Now, researchers say these destructive tsunamis may have been generated by the flow of volcanic material into the sea, challenging previous explanations, according to a new study.

Studies of the Bronze Age disaster led scientists to think the collapse of the volcanic crater (called the caldera) into the sea caused tsunamis after the eruption of Thera, on the island now known as Santorini. However, in the new study, scientists used volcanic and seismic data, along with detailed mapping of the seafloor, to disprove this theory and offer a new explanation.

Their research revealed that the caldera was not connected to the sea when it collapsed and, therefore, could not have caused the tsunamis. Instead, the researchers propose that large volumes of volcanic material flowing rapidly into the sea could have displaced enough water to create tsunamis. [The 11 Biggest Volcanic Eruptions in History]

Pyroclastic flows are fast-moving currents of volcanic material (rock fragments; lava; and hot, expanding gases) that flow down a volcano after an eruption. These flows can reach scorching temperatures of more than 750 degrees Fahrenheit (400 degrees Celsius) and move at speeds of up to 45 mph (70 km/h), the researchers said. As this material flows into the ocean, it solidifies and displaces massive amounts of water, they added.

"This violent entry of the pyroclastic flows into the sea triggered more than one tsunami," said study lead author Paraskevi Nomikou, a geologist and oceanographer at the National and Kapodistrian University of Athens in Greece.

Deposits of volcanic material up to 200 feet (60 meters) thick were found offshore Santorini, supporting the new theory, the researchers said.

Another famous volcano similarly triggered tsunamis: the eruption of Krakatoa, in Indonesia, in 1883. Tsunamis following the explosive Krakatoa eruption occurred when pyroclastic flows entered the sea, not because the caldera collapsed, Nomikou said. This well-recorded eruption caused more than 35,000 deaths and has been studied extensively by volcanologists. But the eruption of Thera may have been many times larger, and more destructive, according to the new study.

In fact, the eruption of Thera did more than blow a hole into the island and trigger tsunamis and flooding. The eruption also set off the decline of the Minoan culture, the dominant civilization in the Mediterranean at the time, the researchers said.

To further understand just how violent and destructive the eruption of Thera was, Nomikou and her colleagues plan to continue their research on the pyroclastic flows.

"We know now that these flows caused so much damage in the area around Santorini like in Crete," Nomikou said. "So we need to better understand these flows and have the total volume of the eruption, because we believe that this was the most catastrophic event during the last 10,000 years."

The new research was detailed in a study published online today (Nov. 8) in the journal Nature.