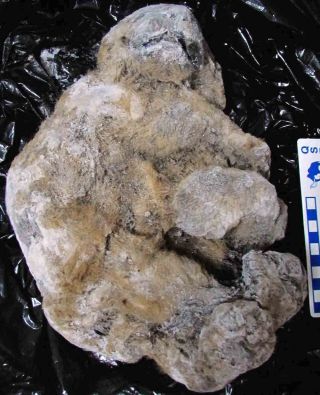 The ancient cave lion cub named Uyan is so well preserved that researchers guessed that its mother fed it milk a few hours before it died.
(Image: © Olga Potapova)

SALT LAKE CITY — For more than 30,000 years, northern Russia's cold permafrost has preserved the small bodies of two furry and wide-pawed cave lion cubs, one of them in almost pristine condition, a new study found.

The two mummified cubs, nicknamed Uyan and Dina after the Uyandina River where they were found, were just about 1 week old when they died, likely crushed by "extensive collapse of the sediments in the den," the study's researchers wrote in a summary of their research. The report was presented as a poster here on Wednesday (Oct. 26) at the 2016 Society of Vertebrate Paleontology meeting.

"They were squished to death," said study co-researcher Olga Potapova, the collections curator at the Mammoth Site of Hot Springs, South Dakota. [10 Extinct Giants That Once Roamed North America]

The last known cave lion lived in what is now Alaska about 14,000 years ago, Potapova said. Little is known about the development of cave lions from cubs into adults, making the finding an extraordinary one, because it tells researchers about how these ancient cubs grew in comparison with their modern-day relatives, the lion (Panthera leo).

For instance, Uyan's body, which was more intact than Dina's, weighs about 6 lbs. (2.8 kilograms), which is about 4.6 lbs. (2.1 kg) heavier than a modern lion newborn, Potapova told Live Science. She added that because newborn lions don't have any identifiable sex characteristics, it's unclear whether Uyan and Dina were male or female.

Uyan's body is about the size of an adult house cat, approximately 17 inches (43 centimeters) long, Potapova said. At about 3 inches (7 cm) long, the cub's tail is just about 23 percent of its body length, "which is significantly smaller than that in modern lions," whose tails are about 60 percent of their body length, Potapova said.

Moreover, Uyan's legs had yet to grow long enough for walking, but the little one could likely crawl, Potapova said. Uyan was also a furry cub, with fur about 1.2 inches (3 cm) long on its body, Potapova noted.

But modern lions don't open their eyes for two to three weeks after birth, and they can't even see properly for another week after that. So, given Uyan's young age at time of death, it's likely that the animal's eyes were closed when it died, Potapova said.

"The advanced development of Uyan's dentition indicates that the milk teeth were likely to be shed at a sooner time, possibly at 2 months," the researchers wrote in the poster. [My, What Sharp Teeth! 12 Living and Extinct Saber-Toothed Animals]

However, because the cubs were still toothless, they likely fed by suckling milk from their mother. Uyan's stomach was empty, but a CT scan of the gut showed that the cub likely had milk just a few hours before dying, Potapova said.

Along with the cave lion mummies, which lived between 29,000 and 57,000 years ago, the researchers also found bones of approximately the same age belonging to a wooly mammoth, steppe bison, reindeer and wolf, along with two large brown bear skulls on the Uyandina's banks, Potapova said. However, these bones were collected about a year after the cubs' discovery, and so those fossils may not be from the exact same site where the cubs were found.

The cave lion finding is "fantastic," said study co-author Beth Shapiro, an associate professor in the Department of Ecology and Evolutionary Biology at the University of California, Santa Cruz.

But despite the mummies' impressive preservation, their DNA is "in terrible condition," and it won't be possible to clone them, as a team of scientists in South Korea has proposed doing, Shapiro told Live Science.

An international team of paleontologists and geneticists is studying Uyan and Dina. The institutions include the Yakutian Academy of Sciences in Russia; the Mammoth Site of Hot Springs; the University of California, Santa Cruz; and the University of Groningen in the Netherlands. The study has yet to be published in a peer-reviewed journal.