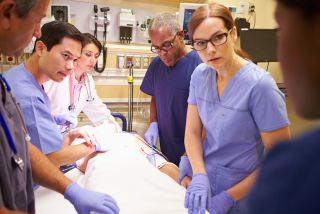 NEW ORLEANS — Dangerous bacteria, including methicillin-resistant Staphylococcus aureus (MRSA), can spread from sick patients in a hospital to the scrubs of health care workers, a new study finds.

These pathogens can also find their way from the patient to items in their hospital room, such as the bed rail, according to the study, presented here at IDWeek 2016, a meeting of several organizations focused on infectious diseases.

Hospital-acquired infections are a growing cause of concern — they affect 1 in 25 hospitalized patients in the U.S. on any given day, according to the Centers for Disease Control and Prevention.

"We know there are bad germs in hospitals, but we're just beginning to understand how they spread," Dr. Deverick Anderson, an associate professor of medicine in the Division of Infectious Diseases at Duke University Medical Center in North Carolina and the lead author of the study, said in a statement. [Tiny & Nasty: Images of Things That Make Us Sick]

To track the spread of these bacteria, the researchers looked at 167 hospitalized patients in their study. These patients received care from 40 nurses over the course of three separate 12-hour shifts in the intensive care unit. The nurses used a new set of scrubs for each shift, according to the study.

Six types of bacteria were transmitted, including MRSA, Klebsiella pneumoniae, bacteria from a group called the Acinetobacter baumanii complex and methicillin-susceptible Staphylococcus aureus (MSSA), a bacterium that is similar to MRSA but is treatable with the antibiotic methicillin.

The researchers didn't find any cases where the bacteria had spread from a nurse to a patient. However, this likely does occur, they said.

"We think it's more common than not that these bugs spread to patients in hospitals because of temporary contamination of health care workers," Anderson said. [10 Deadly Diseases That Hopped Across Species]

Indeed, Anderson noted that bacteria were found in rooms no matter what time of day the samples were taken, even though the rooms were cleaned daily.

Anderson stressed three ways to help stop the spread of infections in hospitals: Health care workers must wash their hands after interacting with a patient, they must use disposable gloves and gowns when treating patients with certain infections, and rooms should be cleaned meticulously and regularly.

The new findings have not been published in a peer-reviewed journal.

Editor's Note: This story was updated on Nov. 4 to clarify the number of instances in which the researchers found bacterial transmission from patient to room.