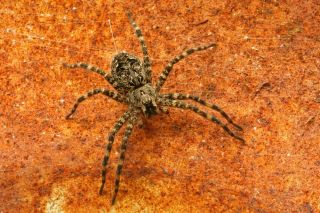 Fishing spiders like this one, Dolomedes tenebrosus, live near the water and are known to sometimes snag small fish and aquatic insects there.
(Image: © Audrey Snider-Bell / Shutterstock.com)

Similar in size, shape and coloration to large wolf spider species, the lesser-known dark fishing spider would no doubt give anybody with arachnophobia a decent scare. But the appearance of these eight-legged arthropods pales in comparison to their frightful and cannibalistic mating behaviors.

Dark fishing spiders (Dolomedes tenebrosus), as you'd expect from their name, are nocturnal and live near water. "They're around, but you have to go look for them at night, with a headlight," said Steven Schwartz, a behavioral ecologist and fishing-spider researcher at Gonzaga University in Washington.

Dark fishing spiders reproduce in the summer — males mature the same season they're born, while females take another year or two to mature.

After maturing, a male will spin a small "sperm web," onto which he'll deposit his sperm. Next, he'll "charge" his two pedipalps or palps (small appendages near the mouth) by using them to suck up the sperm. [Goliath Birdeater: Images of a Colossal Spider]

He'll then go off in search of a mate.

In their natural habitat, male dark fishing spiders can find females — which weigh about 14 times more than males do — quite easily by homing in on silk the females leave behind. (This species, however, does not weave webs.) In fact, Schwartz told Live Science, in tests, 50 percent of captured males were able to find a female within one hour of being released back into the wild. "And one male even contacted five females in an hour," he said.

If given the choice, males will prefer to mate with a virgin female. Sometimes, they will go so far as to hang around females that are about to mature.

This choosiness appears to be linked with their perception of available mates. That is, when presented only with a single female in the lab, a male will try to mate with her, regardless of whether she's a virgin.

But that's only half the story.

Female dark fishing spiders eat their mates after sex. In lab experiments, Schwartz tested whether males would still be willing to mate with a female 30 minutes after she'd mated (and eaten) and three days after she'd mated. In both cases, males had no problem trying their luck — they'd even try to mate with the female while she was eating her first mate.

Given the female's overwhelming size and penchant for cannibalism, you'd expect males to be a bit wary when approaching their potential mates. [Video — Mate, Mutilate, Die: The Curious Life of Male Fishing Spiders]

But it appears that pre-copulatory cannibalism is not common and may be an artifact of the laboratory setting. Schwartz has observed males dazed and running around frantically while under the bright lab lights, causing the female to launch into an attack.

When a male makes contact with a female he wants to mate with, he will tap and stroke her legs and abdomen. He will then climb onto her back and bob his abdomen up and down to send courtship vibrations to the female; the female will respond in kind.

"There are signals going back and forth between them — both chemical and vibratory," Schwartz said.

This whole song and dance can last 1.5 hours or longer. To mate, the male will insert one of his palps into the female's genital opening; then, he will inflate the "hematodochal bulb" within his palp, pushing his sperm into her body.

Then, he spontaneously dies, providing a nice meal for his mate.

Unlike with other types of spiders, the bulbs of male dark fishing spiders don't contract after sex, and it's likely that their eventual death is related to this kind of genital mutilation, Schwartz explained.

In a study published online Oct. 24, 2016, in the journal Current Biology, Schwartz and his colleagues sought to understand what evolutionary benefit there could be to the male's self-sacrifice. Turns out, female dark fishing spiders that were allowed to consume their mates produced more offspring that were larger and had higher rates of survival than those that didn't get that post-copulatory snack.

Stranger still, females that were instead given crickets that were similar in size to their dead mates didn't receive those reproductive benefits, suggesting there's something special about the males.

Schwartz is now working on unraveling this mystery.

"We want to do some chemical analyses," he said. "Do we see things that pop up in the males that we don't see in females and crickets — something weird, something we can go after?"