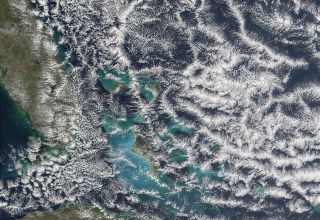 A satellite image showing peculiar hexagonal clouds over the ocean area known as the Bermuda Triangle is prompting speculation about whether they may represent a recurring phenomenon responsible for decades of unexplained disappearances in the region.

The photo appeared in the Science Channel's "What on Earth"? series in a recent episode about the Bermuda Triangle, a loosely defined area bound on the west by the tip of Florida, to the south by Puerto Rico and to the north by Bermuda. In the image, oddly shaped cloud networks hovered above the triangle's western tip, off the coast of Florida, over the Bahamas. Seen from above, the clouds appeared to form six-sided outlines, like honeycombs, with hard edges. They range in size from 20 to 55 miles (32 to 89 kilometers) across, according to the Science Channel.

According to the Science Channel, similar cloud formations in the North Sea near the U.K. have been associated with so-called "air bombs" — powerful downdrafts of air that could overpower and destroy ships and airplanes. But even though the clouds over the North Sea and the Bahamas may look the same, they likely have different causes and interact with the ocean below in different ways, experts say. [Gallery: Lost in the Bermuda Triangle]

The image over the Bahamas was captured in 2002 by NASA's Moderate Resolution Imaging Spectroradiometer (MODIS) instrument on the Terra satellite. The Science Channel described the hexagons as measuring approximately 20 to 55 miles across, and invited comparison to an image of a similar cloud configuration 4,500 miles (7,200 km) away, over the North Sea.

Randy Cerveny, a meteorologist at Arizona State University, told the Science Channel that the hexagonal shapes were signatures of "microbursts," rapid and highly focused blasts of downward-moving air that can generate sea-surface winds reaching nearly 100 mph (161 km/h) and ocean waves towering more than 40 feet (12 meters) high — which could certainly wreak havoc on the sea surface and any vessel on or near it.

According to the Science Channel, radar images of the North Sea clouds did reveal underlying wind gusts close to 100 mph. However, the episode did not present any evidence that similar winds battered the Atlantic Ocean under the hexagonal clouds seen over the Bahamas in 2002, saying only that "scientists believe" the same winds existed.

And meteorologist Kevin Corriveau told NBC News that the hexagonal shape of the Bermuda clouds did not display the distinctive signature of a microburst.

"You would normally have one large to extremely large thunderstorm that wouldn't have an opening in the middle," he said.

He explained that the weather patterns in the two areas were too different to allow comparisons between similar cloud shapes. Moreover, the peculiar formations in the Bahamas may have occurred because of erratic weather patterns created by small islands heating the air differently than the Florida coastline.

"I wouldn't say what we're seeing in the Bahamas is the exact same as in the North Sea," Corriveau said.

Honeycomb cloud networks are actually a regular occurrence under certain conditions in the mid-latitudes, according to NASA — they can take shape as part of a low-pressure system or cyclone when cold air masses move over warm water. And they can form as open-cell clouds — cloud outlines surrounding an empty space — or closed-cell clouds, which are solid shapes.

Since the 1940s, dozens of ships and airplanes have gone missing while traveling through the Bermuda Triangle. Disappearances were blamed on numerous implausible culprits, from the lost city of Atlantis to deep-sea methane blasts.

Equipment failure and human error are less dramatic explanations for vanished vessels in the Bermuda Triangle, but they are the most likely ones, experts say. "There is no evidence that mysterious disappearances occur with any greater frequency in the Bermuda Triangle than in any other large, well-traveled area of the ocean," the National Oceanic and Atmospheric Administration said in a statement.