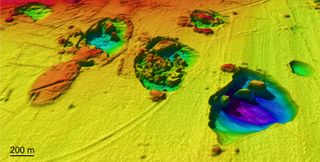 Giant craters on the ocean floor in the Barents Sea hold secrets about ancient methane, not the Bermuda Triangle. The color indicates the depth of the craters, the purple area being the deepest at approximately 118 feet (36 meters).
(Image: © Centre for Arctic Gas Hydrate, Environment and Climate)

There's a saying that any publicity is good publicity. But scientists whose discoveries inspire misleading headlines would probably beg to differ — like the researchers whose recent description of deep-sea craters was hailed by many news outlets as an explanation for mysterious disappearances in the Bermuda Triangle.

The scientists suspected that the craters were caused by methane explosions on the ocean floor that occurred after the last ice age, about 11,700 years ago.

A number of media outlets took that to mean that similar explosive methane activity in the Bermuda Triangle region of the Atlantic Ocean could be blamed for unexplained disappearances. Since the inexplicable 1945 disappearance of "Flight 19" — five U.S. military aircraft — a number of ships and airplanes containing hundreds of people have been reported missing after passing through or over waters in the Triangle, which is bounded by points in Bermuda, Florida and Puerto Rico. [Photos: Lost in the Bermuda Triangle]

In an abstract published online March 2016 following its submission to the European Geosciences Union (EGU) General Assembly, the scientists detailed a number of craters in the Barents Sea, an area in the Arctic Ocean with a basin shared by Norway and Russia.

The craters are distributed around an area measuring about 39 square miles (100 square kilometers), Karin Andreassen, one of the researchers, said in a statement. The scars on the seafloor were quite large — measuring as much as 0.6 miles (1 km) wide and up to 44 yards (40 meters) deep.

These craters likely were formed by gas "blowouts" from the seabed, when methane in the form of ice thawed as the last ice age waned and the Earth warmed, said Andreassen, a professor of marine geology and geophysics at The Arctic University of Norway.

Fortunately for geoscientists, those blasts would have sent seismic waves through Earth. High-resolution, 3D visualizations of seismic data from the craters obtained in 2015 allowed the researchers to investigate the "fingerprints" left behind by the explosions that shaped the craters, providing a clearer picture of how violent methane blasts could have left their mark in the rocky ocean floor.

But "blowouts" of the type that shaped the craters were particular to that period in Earth's history; they were triggered by geologic processes that followed roughly 100,000 years when much of Earth was covered by ice sheets.

"Conditions during the last ice age cannot be compared with what we see today," Andreassen said. "We are not making any links to the Bermuda Triangle."