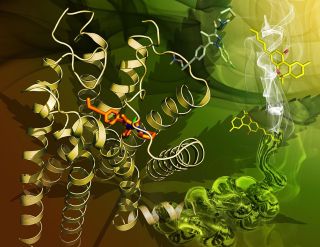 This image shows a drawing of the cannabinoid receptor, called CB1. The receptor is the yellow, ribbon-like structure, and it is shown bound to a stabilizing molecule called AM6538, which is represented by orange sticks. The active ingredient in marijuana, THC, is shown as yellow sticks. (The image of the receptor is superimposed over the shadow of a marijuana leaf and artistic smoke.)
(Image: © Yekaterina Kadyshevskaya, The Stevens Laboratory, University of Southern California)

The receptor in the brain involved in the "high" people feel after smoking marijuana is revealed in a new, detailed, 3D image today, according to a new study. This provides scientists with their clearest picture yet of this receptor, the study said.

The new image shows how molecules such as THC, marijuana's main psychoactive ingredient, bind to this receptor, which is located in the surface of numerous nerve cells, the researchers found.

The findings may one day help researchers determine why certain medications designed to mimic the medicinal properties of marijuana without the "high" effect might cause side effects, the researchers said. [11 Odd Facts About Marijuana]

"We need to understand how marijuana works in our bodies," study co-author Zhi-jie Liu, co-leader of the study and a professor of molecular structural biology at ShanghaiTech University in China, said in a statement. People use the drug both medically and recreationally, but it contains compounds that can be very dangerous, Liu said. "By doing both the basic science and understanding how this receptor works, we can then use it to help people in the future."

People in many cultures have used the marijuana plant for centuries to treat multiple health issues, the researchers said in their study, published today (Oct. 20) in the journal Cell. In recent years, researchers have moved beyond using the plant itself and have been trying to produce synthetic compounds that could target the same receptors as marijuana. This could help people who have health problems ranging from pain to obesity.

However, some of these compounds have turned out to have serious side effects, the study said. For example, one drug based on such compounds, called  rimonabant, was taken off the market in Europe because some people who took it experienced side effects such as depression, anxiety and even suicidal thoughts. The same drug was never approved for use in the United States because of concerns about these side effects, the researchers said.

The new model of the marijuana receptor described in the recent study could also be useful for understanding how certain recreational drugs called synthetic cannabinoids might affect people's health, the researchers said.

"We are working hard to understand how the receptor is activated so that we can better understand the effects of synthetic cannabinoids such as K2 and Spice," study co-author Raymond Stevens, also a professor of molecular structural biology and drug discovery at ShanghaiTech University, told Live Science. [7 Ways Marijuana May Affect the Brain]

The harmful effects of these synthetic compounds on health are becoming a major health problem in the United States, sending more and more people to emergency rooms, the researchers said.

Though there have not been any documented cases of overdosing on the marijuana plant, there have been cases of severe and even deadly reactions to synthetic cannabinoids, the researchers said. They added that they hope to understand why this is the case, because both of these substances target that same "marijuana receptor."