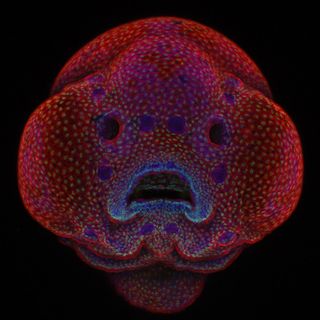 An image of a zebrafish embryo's face was the first-place winner of the 2016 Nikon Small World microphotography contest.
(Image: © Oscar Ruiz)

In your face! A 4-day-old zebrafish embryo's dour mug nabbed the top prize in the annual Nikon Small World photo competition, which showcases often-unseen wonders of the natural world that can be viewed only through a microscope.

Captured by senior research scientist Oscar Ruiz, at the University of Texas MD Anderson Cancer Center, the image reveals incredible detail in the embryo's face. Ruiz's research investigates zebrafish even more closely — at the cellular level — to mark the smallest changes that mutations can cause during development. Mapping every physical feature in the embryos' faces at each developmental stage is helping the scientists to identify the genetic mechanisms that form facial abnormalities in humans, such as cleft lip and cleft palate.

Other winning images offered stunning views of highly specialized structures, like the front foot of a diving beetle, a butterfly's proboscis and wildflower stamens. Some invite the viewer even closer, to examine delicate retinal ganglion cells in a mouse's eye and neurons from human skin cells.

Even cow dung appears strangely beautiful when it's magnified under the photographer's camera.

Photographers from around the world submitted thousands of images, which were reviewed by a suite of judges — including biologist Joe Hanson, host of the PBS Digital Studios show, "It's OK To Be Smart" on YouTube.

"We took a long, hard look at every one of them!" Hanson told Live Science. "I was just blown away by the talent and creativity behind the images we saw. Every year, these photographers keep raising their game, employing new technologies, finding new and interesting subjects … it's nice to be reminded that nature's still got more mind-blowing things to show us," he said.

What defines a winner?

The judges narrowed down submissions to about 100 images, and according to Hanson, that's when the real challenge began — selecting the 20 finalists. At that point, every image was technically impressive, interesting, beautiful, informative — what makes any one of them stand out from the rest?

Hanson explained that the judges primarily wanted the final selections to represent a range of subjects and microscopy techniques. Beyond that, to make their choices, they considered certain key factors about each image, including technical innovation and uniqueness of the subject matter.

"Most of all, I was looking for images that told a story that brought out emotion or an overpowering sense of 'what in the world?'" Hanson said. "The beauty of these images, being microscopy, is that they truly represent art alongside scientific observation."

For instance, Ruiz tracks the zebrafish embryos' development in real time with time-lapse photography, a technique that has not been widely used before to study the growth of facial abnormalities, Ruiz said in a statement.

The zebrafish and other winning photos could be viewed as visual ambassadors, amplifying aspects of research that the general public typically never sees, and showcasing the beauty that's a part of science, which often goes unrecognized.

"Scientists are intensely creative people — it's how they keep coming up with new questions to answer. And it's nice that people get to see that, thanks to this contest," Hanson added.

A gallery of the contest winners' photos will be featured on the Nikon Small World website. And voting is still underway for a new Popular Vote category — visitors to the contestants' gallery can cast their votes until Oct. 25, and the winner will be announced Oct. 26 on Instagram.