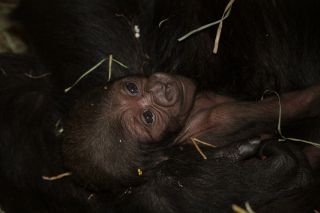 Say hello to JJ, who was born recently at the Columbus Zoo.
(Image: © Audra Meinelt)

The Columbus Zoo and Aquarium has released the first images of its male baby gorilla born on Sept. 28 at 1:18 a.m. EDT — and the little one has eyes that could melt most hearts.

Named JJ, the pint-size primate — a western lowland gorilla — is the 32nd gorilla born at the Columbus Zoo, which also facilitated the birth of the first gorilla born in captivity, nearly 60 years ago. That gorilla, Colo, is still living at the zoo. She is the oldest gorilla on record — and is also JJ's great-grandmother.

JJ, along with his mother Tabibu, will remain out of the public eye for several months, to allow the mother and newborn time to bond, according to a statement from zoo officials. [Baby Gorillas Show Off Cute Hairstyles]

"She's a first-time mother and has no previous experience with infants," Audra Meinelt, assistant curator of the Congo Expedition at the Columbus Zoo in Ohio, told Live Science. "So we want her to focus on that baby."

Zoo caretakers eventually identified the newborn as male, though it was days after the birth before they could be sure. Gorilla young are typically carried by their mothers in a stomach-to-stomach position, which can make it difficult for observers to determine a new baby's sex, Meinelt explained.

"We had suspicions, but it took days to confirm that we could see male parts," Meinelt said. "It depends on what kind of look the mom lets you have, so it's hard to tell until you're lucky enough to get that glimpse."

Western lowland gorillas are listed as critically endangered by the International Union for Conservation of Nature (IUCN). For zoos that maintain gorilla populations, breeding them successfully in captivity is a vital part of preserving this fragile species.

To that end, the Association of Zoos and Aquariums maintains a Species Survival Plan that compiles genetic information about animals in captivity, to help zoos determine which pairings will likely produce the healthiest offspring.

JJ is the first infant sired by his father, Macombo II. But Mac, as he is called, had previously helped care for unrelated infants in his group — an uncommon behavior in adult male gorillas, zoo officials said in the statement. Mac was born at the Columbus Zoo in 1983; Tabibu was born in Chicago's Lincoln Park Zoo in 1992 and came to live at the Columbus Zoo in 2012.

Once prospective mates have been introduced within a social group, zoo caretakers test female gorillas monthly for signs of pregnancy. "We use human pregnancy tests," Meinelt told Live Science, which they administer using urine collected from enclosure floors or captured directly from the gorillas.

Gorilla gestation is comparable to a human female's, but there can be a wide range of possible due dates — in Tabibu's case, that window was about six weeks, during which Tabibu could have gone into labor at any time, Meinelt said. Shortly before that period, caretakers moved Tabibu's entire group to a new area, where they would rotate between two spaces, only one of which was open to public view.

For now, JJ will be visible to the public only through photos, and zoo officials hope that news of his birth will kindle visitors' interest — not just in the newborn himself, but in his zoo "family" and in gorilla conservation efforts worldwide.