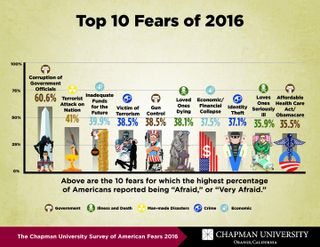 A 2016 survey of American fears found that Americans are most spooked by government corruptionn and terrorism, with canonical fears of ghosts and zombies much less common.
(Image: © Chapman University)

We ain't afraid of no ghosts or zombies, according to a new national survey that suggests Americans are most fearful of government corruption.

More specifically, 60 percent of the public fears the corruption of government officials. About half of Americans believe that the government is concealing information about the 9/11 attacks, for example, a new survey suggested.

Clowns were also low on the fear list, with fewer than 10 percent of survey respondents saying they feared the painted grinners. That's despite reports of creepy clowns popping up in various states, scaring and in some instances harming people. However, the clown sightings were first reported in the U.S. this year in late summer and early fall, while the survey was conducted in the spring. [Halloween 2016: A Guide to the When, Why, What and How]

The new findings are part of a broader survey called the Survey on American Fears – Wave 3 and included completed surveys from 1,511 Americans over age 18 during a month this spring. The 45-question survey included questions, such as, "How afraid are you of the following?" (options included zombies, blood, needles, ghosts, the dark, vaccinations and whooping cough) and, "How much of the time do you think you can trust the national government?"

Each completed survey was weighted based on the proportion of people from that demographic in the general American population, although weighting was capped at the extreme ends to prevent skewing of the data. (A recent analysis found that weighting techniques have led, in one survey, to a single black Trump supporter in Illinois having his answers to national polls weighted 30 times more than the average respondent, skewing that national poll, The New York Times reported. That data was not "trimmed" or capped to avoid extreme over- or under-weighting.)

Perhaps understandably, given the vitriol of the current election season, people's top fear was the corruption of government officials, while the second most-stated fear was a terrorist attack (41 percent).

Rounding out the top-20 list, with percentages of respondents who said they were "afraid" or "very afraid," here are the things Americans fear:

These fears do not correspond with the odds of dying from various factors: In 2014, terrorism was linked to 32,700 deaths worldwide, but most of those deaths occurred in a handful of countries outside of the U.S., while the same year, heart disease claimed the lives of 614,348 Americans. [The Top 10 Causes of Death]

The top fears have changed from the 2015 results, when people were most fearful of cybercrime and surveillance.

"The 2016 survey data shows us the top fears have shifted from last year's, which were heavily based in economic and 'Big Brother'-type issues, to include more health and financial fears this year," said lead researcher Christopher Bader, a professor of sociology at Chapman University in California. "People often fear what they cannot control," continued Bader, "and we find continued evidence of that in our top fears."

Monsters did not rank high in respondents' amygdala (the brain's fear center), it seems, with just 10 percent of respondents saying they were "afraid" or "very afraid" of zombies, about 9 percent saying the same about ghosts and 8 percent saying so for clowns.

Here are the 20 least-common fears: