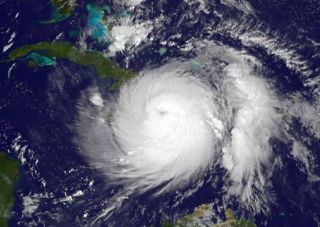 As Hurricane Matthew made landfall in Haiti as a Category 4 storm early this morning (Oct. 4), a National Oceanic and Atmospheric Administration satellite captured imagery of the massive system.

The GOES-East satellite, an eye in the sky constantly watching the Atlantic Ocean and the eastern United States, used infrared and visible light to track Hurricane Matthew's progress from Oct. 2 to today. A NASA animation of the data re-creates the storm track, ending at about 7 a.m. EDT when the storm hit Haiti. Matthew is expected to land at Cuba later today, according to the National Hurricane Center (NHC).

According to NASA's Goddard Space Flight Center, the GOES-East satellite isn't the only one watching Hurricane Matthew. The space agency's Aqua satellite imaged the storm in the early morning hours today and found cloud-top temperatures lower than minus 70 degrees Fahrenheit (minus 57 degrees Celsius). This low temperature indicates the storm's ability to generate heavy rains, NASA said. [Tropical Storms and Hurricanes of 2016 (Photos)]

According to the NHC, Matthew's maximum sustained winds remained around 145 mph (230 km/h) as of 2 p.m. EDT. The storm was about 65 miles (105 kilometers) east-southeast of Guantanamo, Cuba. Hurricane watches were in effect for Haiti — where news reports documented flooding and fears of mudslides — for the Cuban provinces of Guantanamo, Santiago de Cuba, Holguin, Granma and Las Tunas, and for the southeastern, central and northwest Bahamas.

The NHC forecasted that the storm will turn north-northwest tomorrow (Oct. 5), lashing the southeastern and central Bahamas before moving toward the northwestern Bahamas tomorrow night. Hurricane-force winds extend up to 60 miles (95 km) from the eye of the storm, and tropical-storm-force winds reach up to 185 miles (295 km) from the eye. Tropical-storm warnings are currently in effect for much of the Dominican Republic as well as the Turks and Caicos Islands.

A storm surge of up to 11 feet (3.4 meters) is possible along the southern coast of Cuba, the NHC said.