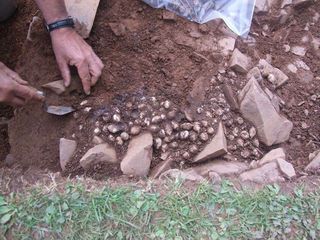 An archaeologist at an ancient battlefield site in Scotland unearths the largest cache of Roman lead sling bullets ever found.
(Image: © Burnswark Project)

A bloody assault by Roman legions on a hill fort in Scotland around 1,800 years ago is being pieced together using the remains of Roman missile weapons that were used in the attack.

The excavations at Burnswark Hill, in the Dumfries region of southwest Scotland, have unearthed the largest cache of Roman lead sling bullets yet discovered — part of the huge arsenal of missile ammunition used by the attacking legions to subdue the native defenders of the hilltop fort.

So many sling bullets and other Roman missiles have now been found at Burnswark Hill that archaeologists think the raid was staged as a warning to anyone who resisted Roman rule: an act of "exemplary violence" designed to terrorize the Scottish tribes into submission, the researchers said. [See Photos of the Roman Sling Bullets Discovered at Burnswark Hill]

"You've got a relatively small hill fort [under attack by] a relatively large Roman force, using a relatively large amount of missile material," John Reid, an archaeologist with the Trimontium Trust, the Scottish historical society directing the investigation at the Burnswark Hill site,told Live Science. "Exemplary violence is nothing new, and it's certainly not unique to the Romans — but the Romans did it on a grand scale."

The researchers estimate that up to 5,000 Roman soldiers took part in the attack, based on the size of two Roman army camps that were built to the north and south of the hilltop fort.

The number of people in the hill fort is not known, but judging by the size of the force used to attack them it may have been between 1,000 and 2,000 armed defenders, Reid said, as well as their families and other non-combatants who had taken refuge there from the Romans.

North of the wall

Burnswark Hill lies just a few miles north of the chain of forts and ramparts known as Hadrian's Wall, which was built across southern Scotland during the reign of Emperor Hadrian (A.D. 117 to 138) and served for many years as the northern border of the Roman Empire.

But Hadrian's successor, Antoninus Pius, who reigned from A.D. 138 to 161, ordered the Roman armies in Britain to subdue the tribes north of the wall. Burnswark Hill may have been first in the firing line, according to the archaeologists.

"We think that the sling-bullet event at Burnswark Hill was part of the Roman invasion of lowland Scotland, and it may have been the opening event," Reid said.

The key to the study has been the discovery of more than 800 lead bullets buried in the ground of the ancient battlefield. The location of the bullets were mapped with specialized metal detectors and used to recreate some of the events of the assault. Similar techniques have been used by battlefield archaeologists to map battles from the early modern period, based on the distribution of lead musket balls. [7 Technologies That Transformed Warfare]

But the Burnswark Hill investigation may be the first time the technique has been used to map a battle from the ancient world.

"Normally, ancient battlefields are entirely invisible, because the projectiles are not detectable: iron will rust away and wood will disintegrate, while stone is undetectable," Reid said. "So we are lucky in that Burnswark represents one of the few places in Britain where we know that lead projectiles were used, and we've got metal detector technology that can pick up the distribution of these lead sling bullets and work out the choreography of the action."

Several different types of sling bullets have been found at the site, from small lead bullets drilled with holes that the researchers think were designed to make a whistling noise in flight and terrorize their targets, to the largest lemon-shaped sling bullets, which weigh up to 2 ounces (60 grams).

Archeologist Andrew Nicholson, who led the excavations at Burnswark Hill in September, explained that the different bullets found at different places on the battlefield hinted at the progress of the raid. [Photos: Ancient Roman Fort Discovered]

"The interesting thing is that all the whistling sling bullets are from the Roman camp on the south face of the hill fort, so clearly they are using different sling bullets for different purposes," Nicholson told Live Science.

"Our distribution plan clearly shows that the south side, where we think the final assault took place, is where the whistling bullets are, which is what you would expect for their psychological effect," he said. "[But] the north camp, which we've always seen as blocking the escape, simply has the very large, very lethal lemon-shaped bullets."

The researchers are now preparing samples of lead from the sling bullets for isotope analysis, which they hope may help them pin down the date of the Roman assault on the hill fort.

The researchers are also studying several acorn-shaped sling bullets found at Burnswark Hill that appear to match bullets found at other Roman sites in Scotland, but nowhere else in the former Roman Empire.

The acorn-shaped bullets "might mark a particular batch of bullets that would end up being allocated to a particular unit or group of units, and this might become an identifier for tracing the movements of those units," Nicholson said.