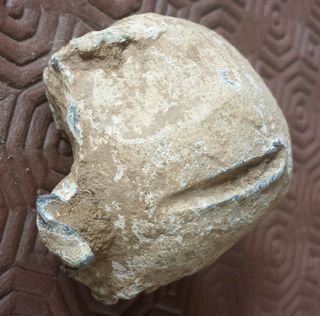 Found at the site of the Battle of Northampton, this lead ball is thought to be the oldest surviving cannonball in England.
(Image: © Northampton Battlefields Society)

The oldest surviving cannonball in England has been rediscovered on a medieval battlefield.

The cannonball, which was lost for several years, was likely used in the Battle of Northampton in 1460, one of the battles in the decades-long Wars of the Roses. The giant ball has two large dents from a few bounces, as well as a gouge mark that contains fragments of sand from the area.

Most historians believe the cannon was first developed in China, and was used in war throughout the Middle East before making its way to Europe. The first English illustration of a cannon dates to 1327, and the "crakys of war," as cannonballs were called. Thought to be a gunpowder-based weapon, the cannon was first mentioned that same year in accounts of the Battle of Stanhope Park, one of the battles in the First War of Scottish Independence, according to the "Oxford Encyclopedia of Medieval Warfare and Military Technology" (Oxford University Press, 2010). [10 Epic Battles That Changed History]

The Battle of Northampton was fought in 1460 as part of a 32-year struggle over the English throne between two rival houses, York and Lancaster. The drawn-out feud finally ended when Henry Tudor, of the House of Lancaster, defeated King Richard III at the Battle of Bosworth Field.

The massive cannonball was first discovered several years ago, but was lost until Glenn Foard, an archaeologist at the University of Huddersfield, in England, rediscovered it last year. Foard performed a thorough analysis of the ball, which sustained major impact damage.

"It is highly likely that the projectile was fired during the battle in 1460," Foard said in a statement from the Northampton Battlefield Society.

The cannonball has been deformed, likely by two major impacts. The cannonball also had a gouge filled with iron and sandstone from the area, likely picked up as it bounced around the battlefield. The cannonball showed more damage possibly from hitting a tree.

Historical accounts suggest that rain prevented the cannons of the Lancastrian forces from firing. So researchers suspect the cannonball may have been fired by the Yorkists.

The ancient battlefield is rich with other archaeological treasures. The site also houses the remains of a Roman villa, finds from the Stone Age and the possible traces of ancient Neolithic pathways.