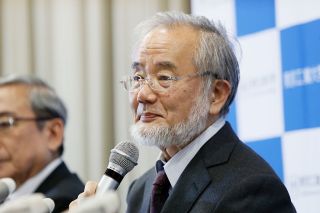 For illuminating the weird cellular phenomenon of "self-eating," Yoshinori Ohsumi has won the Nobel Prize in Physiology or Medicine, the Nobel Foundation announced this morning (Oct. 3).

Called autophagy — from the Greek words "auto" and "phagein," meaning self and to eat — the process allows cells to destroy their own guts and essentially recycle them.

Little was known about the odd behavior until Ohsumi's "brilliant experiments" in the early 1990s, according to a statement by the Nobel Foundation. In these experiments, the Fukuoka, Japan-born scientist identified genes in yeast that were crucial to autophagy, revealing the underlying mechanisms of the process in yeast and showing that similar mechanisms were used in human cells. [The 10 Noblest Nobel Prize Winners of All Time]

Discoveries by Ohsumi, who is at the Tokyo Institute of Technology in Japan, led to a new understanding of how cells recycle their contents, revealing how autophagy is key in other physiological processes, such as a cell's response to infection or starvation.

The discovery can be traced back to the 1950s, when scientists discovered a specialized compartment, or organelle, inside cells that digested proteins, carbs and lipids (fats). Researchers later found, surprisingly, that whole other organelles were sometimes found inside this specialized compartment, called a lisosome. They knew there must be a transport system to get these relatively large cellular parts to the compartment. These travel vehicles, now called autophagosomes, transported "cellular cargo" to the lysosome to be broken down, researchers found, according to the Nobel statement.

One mystery that remained, however, was how the cell ditched and recycled larger protein complexes and wearied organelles. That's where Ohsumi's experiments come into play.

"The vacuole was thought to be just a garbage can in the cell, and not very many people were interested in its physiology," Ohsumi told The Journal of Cell Biology in a Q&A in 2012. "So I thought it would be good to study transport in the vacuole because I would not have much competition." (In addition, he said, an advancement in the lab he was working in also nudged his research.)

Ohsumi was interested in understanding autophagy in the human counterpart of the lisosome, called the vacuole. Yeast is often used as a model for human cells, but yeast is tiny. So, he had to figure out a way to actually see the inner workings of yeast cells.

"Ohsumi reasoned that if he could disrupt the degradation process in the vacuole while the process of autophagy was active, then autophagosomes should accumulate within the vacuole and become visible under the microscope," according to the statement.

By culturing mutated yeast that lacked enzymes used for degradation in the vacuole, while simultaneously starving the cells to trigger autophagy, Ohsumi was able to observe vacuoles filled with small vesicles that hadn't been degraded. He proved that autophagy occurs in yeast cells and went on to identify the genes involved in the process.

As for why he entered the research field in the first place, Ohsumi credits his father: "I was probably influenced by my father, who was a professor of engineering at Kyushu University. I was familiar with academic life while I was growing up. But whereas my father worked in a very industrially oriented field, I was more interested in the natural sciences," he told The Journal of Cell Biology.

Ohsumi will receive this year's Nobel Prize amount of 8 million Swedish krona (about $937,000).