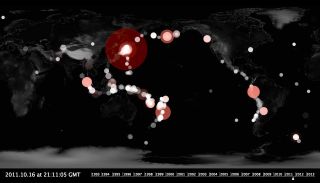 A video displays earthquakes in time and space by representing the temblors as sounds and dots.
(Image: © Seismic Sound Lab/Vimeo)

You can now eavesdrop on some of the world's largest earthquakes from deep inside the planet. A new project lets you see, hear and feel seismic waves created by massive temblors.

Working with the Seismic Sound Lab at Columbia University's Lamont-Doherty Earth Observatory in New York, a team of researchers and artists has turned seismic waves, or the waves of energy created by earthquakes, into sound and images. The resulting "SeismoDome" show offers visitors an entirely different sensory experience of earthquakes by using sound as an entryway into the physics of the temblors, the scientists said.

"These are such complex, intriguing sounds [that] they excite wonder and curiosity in anyone," Ben Holtzman, a geophysicist at the Lamont-Doherty Earth Observatory who leads the Seismic Sound Lab and narrates part of the show, said in a statement. "Why does that one sound like an acorn hitting a tin roof, and that one sounds like a gunshot? Or why does a nuclear bomb test sound different than an earthquake?" [The 10 Biggest Earthquakes in History]

The project began more than a decade ago when Holtzman and sound designer Jason Candler were playing in a band together. Candler asked Holtzman what an earthquake sounded like, sparking the research that led to the SeismoDome, Hotlzman said.

Seismic waves had been converted into sound before, but Holtzman and Candler have taken it a step further, coupling the sounds to visualizations to illuminate how the seismic waves move through the Earth. They also sped up both the sound and visuals by a factor of several thousand (because the waves are normally too slow for people to hear), filtering the sounds and visualized data to give a clearer sense of a quake's internal impact and aftershocks, the researchers said.

A series of videos offers glimpses of how the SeismoDome show will allow audiences to experience earthquakes in a new way. One video follows the Tōhoku earthquake that struck off the coast of Japan in 2011. Another displays earthquakes in time and space by representing the temblors as sounds and dots scaled by magnitude on a map, revealing the most active regions.

The researchers said playing the SeismoDome show inside a planetarium will create the effect of being inside the core of the planet, offering viewers the full sensory experience. The team is bringing the SeismoDome to the Hayden Planetarium at the American Museum of Natural History in New York City on Nov. 19.

The team's research also goes beyond the SeismoDome project and educational applications, because the use of so-called "auditory seismology" could one day help scientists recognize early warning signs of earthquakes, the researchers said.

"As you're listening to seismic signals, changes in the sound would trigger where to look in the seismic data," Holtzman said. "If we routinely look at the records this way, patterns will emerge, and we'll start to be able to identify differences."