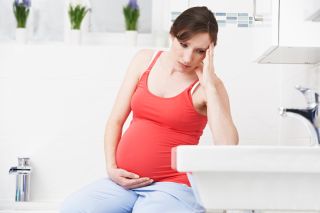 For any woman who's been told that morning sickness is a sign of a healthy pregnancy, good news: Nausea and vomiting in pregnancy are linked to a lower risk of miscarriage, a new study finds.

In the study of women who had had either one or two miscarriages, those who had morning sickness in their current pregnancy had a 50 to 75 percent lower risk of having another miscarriage, the researchers at the National Institute of Child Health and Development (NICHD) found.

The findings may "provide reassurance to women experiencing these difficult symptoms in pregnancy," the researchers, led by Stefanie Hinkle, a population health researcher at the NICHD, wrote in the study. [9 Uncommon Conditions That Pregnancy May Bring]

Up to 80 percent of women experience nausea and vomiting during pregnancy, according to the study, published today (Sept. 26) in the journal JAMA Internal Medicine.

Previous research has suggested that morning sickness could be linked to a reduced risk for miscarriage. Earlier studies, however, didn't collect data on women before they had their first ultrasound, which is usually around 6 or 7 weeks of pregnancy.

In the new study, the researchers examined data on more than 1,200 women who were enrolled in a larger study called the Effects of Aspirin in Gestation and Reproduction trial, which looked at the effects of taking aspirin on pregnancy loss and live birth.

All of the women in the study were trying to conceive during the study period, and nearly 800 of them became pregnant, according to the researchers. During the first trimester, the women kept a daily diary, in which they rated their morning sickness symptoms. In the second and third trimesters, they filled out monthly questionnaires about their morning sickness symptoms, according to the study.

During the study, 188 women experienced a pregnancy loss.

There are several theories for why morning sickness may be linked to a reduced risk of pregnancy loss, the researchers wrote.

One idea is that nausea and vomiting encourage pregnant women to change their eating habits, which could have an effect on pregnancy, according to the study.

Not all experts are ready to celebrate morning sickness just yet, however.

"As common as nausea and vomiting are in the first trimester of pregnancy, researchers and clinicians should be cautious about deeming it to have a protective effect against pregnancy loss," Dr. Siripanth Nippita, an OB/GYN at Beth Israel Deaconess Medical Center in Boston, and Laura Dodge, a staff scientist at the same institution, wrote in an editorial that was published alongside the study in JAMA Internal Medicine.

Moreover, while it may be reassuring to tell women that morning sickness is beneficial, women "should not be discouraged from seeking treatment for a condition that can have a considerable negative effect on their quality of life," Nippita and Dodge wrote. In other words, just because morning sickness may be a good thing doesn't mean women need to suffer through it.