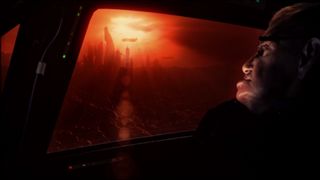 Humanity should be wary of seeking out contact with alien civilizations, Stephen Hawking has warned once again.

In 2010, the famed astrophysicist said that intelligent aliens may be rapacious marauders, roaming the cosmos in search of resources to plunder and planets to conquer and colonize. He reiterates that basic concern in "Stephen Hawking's Favorite Places," a new documentary streaming now on the CuriosityStream video service.

"One day, we might receive a signal from a planet like this," Hawking says in the documentary, referring to a potentially habitable alien world known as Gliese 832c. "But we should be wary of answering back. Meeting an advanced civilization could be like Native Americans encountering Columbus. That didn't turn out so well."

For what it's worth, some other astronomers believe Hawking's caution is unwarranted. Any alien civilization advanced enough to come to Earth would surely already know of humans' existence via the radio and TV signals that humanity has been sending out into space since 1900 or so, this line of thinking goes.

The alien musings are just a small part of "Stephen Hawking's Favorite Places." The 26-minute documentary shows the scientist zooming through the cosmos on a souped-up CGI spaceship called the "S.S. Hawking," making five separate stops.

Hawking observes the Big Bang that created the universe, visits the monster black hole at the center of the Milky Way, journeys to Gliese 832c and tours Saturn in Earth's own solar system. Then, he makes a final stop in Santa Barbara, California, which Hawking calls "my home away from home."

"In 1974, Caltech [the California Institute of Technology] offered me a job in California," the Englishman Hawking says in the documentary. "I jumped at the opportunity. In the sun with my young family, it was a world away from the gray skies of Cambridge, [England]. I've traveled the globe, but I've never found anywhere quite like this."

You can watch a preview of "Stephen Hawking's Favorite Places," and learn how to subscribe to CuriosityStream, at the video service's website:www.curiositystream.com.