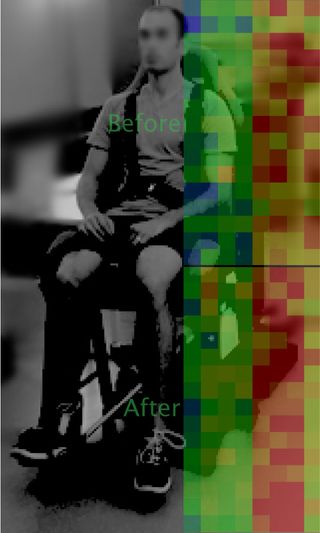 A new study suggests that muscle memory may not really exist. The study found that genes activated in response to exercise -- shown on the right in color blocks (before on top, after on bottom) -- did not differ when someone had previous intense training on that leg.
(Image: © Malene Lindholm and Carl Johan Sundberg, Karolinska Institutet, Stockholm, Sweden)

Muscle tissue does not have a "memory" of past exercise training, new research suggests.

Muscles that have trained hard in the past and those that have not trained show similar changes in the genes that they turn on or off in response to exercise, the research found.

That may be both good news and bad news for people, said study co-author Malene Lindholm, a molecular exercise physiologist at the Karolinska Institute in Stockholm.

"It's encouraging for people who haven't trained when they're young because you don't have a disadvantage," Lindholm told Live Science. When you start exercising, "you can adapt just as well as people who have trained," she said.

On the flip side, the findings also suggest that being a past tennis pro is no guarantee that you could quickly pick up the sport again at the same elite level, she added. [Exercise and Weight Loss: The Science of Preserving Muscle Mass]

Exactly how long exercise training lasts has been up for debate. On the one hand, studies have demonstrated that immediately after exercise, the body ramps up the action of many genes. These effects persist for hours to a day after exercise.

And, over the longer term, if people continue to work out, the body starts making more proteins and that leads to more long-term adaptations.

But on the other hand, it's also pretty clear that these adaptations tend to dissipate quickly if a person stops exercising regularly.

"As soon as you stop training — especially if you do something as dramatic as breaking a leg, so you stop moving completely — you lose muscle mass and endurance-training effects very quickly," Lindholm said.

To see whether any adaptations at the genetic level lingered once people stopped exercising, Lindholm and her colleagues asked 23 very sedentary people to come into the lab and kick one leg 60 times a minute for 45 minutes. The participants repeated this exercise four times a week over three months.

They took nine months off, then returned to repeat the training, but this time with both legs.

The team took muscle biopsies (which involves anesthetizing the skin and using a needle to extract muscle cells) both before and after both exercise training periods, and  analyzed which genes were active in the muscle tissue in each leg. (They alternated whether people initially trained their dominant or non-dominant leg to remove the effects of handedness from the study.)

Results showed that gene expression between the two legs did not differ, even though one leg had previously trained hard for three months, the researchers reported today (Sept. 22) in the journal PLOS Genetics.

A few hints suggested that training may have induced some lasting epigenetic changes, or changes in chemical markers on the genes that affect how they are expressed, but the results were too tentative to say for sure.

The findings suggest that people's muscles don't hang on to the metabolic changes associated with exercise for very long.

That makes sense from an evolutionary perspective, Lindholm said. Maintaining muscles takes a lot of calories.

"It's a cost to keep up really metabolically active muscles or a big muscle mass, and there is no reason for the body to expend energy on that if we don't need to use the muscle," Lindholm said.

In fact, in times when food was scarce, keeping bulky muscles that weren't needed might have led people to starve, she said.

Although new results suggest that the muscle cells themselves do not retain a "memory" from exercise, the same is not true for the nerves that thread through the muscles, or the brain regions that control movement, Lindholm said.

"Your nerves have learned in which order to activate your muscles in order to perform a certain movement," she said.

Riding a bike, serving a tennis ball and learning how to walk when you're a really small child, are things that you can't really forget, Lindholm said.

So tennis player Venus Williams or gymnast Simone Biles likely retain an almost instinctive memory of how to activate their muscles just right for a killer serve or a double-twisting double backflip.

But the same is not true for the muscle power needed to execute a perfect jump or a serve, Lindholm said.

"If you don't train your muscles won't be able to produce the force necessary to do it, even though your nerves know exactly which order to activate," Lindholm said.