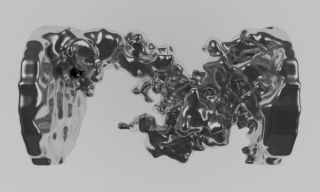 What looks like the liquid android from 1991's "Terminator 2: Judgment Day" stuck in the spin cycle is actually the insides of a lithium-ion battery.

But this new imagery is more than just a creepy picture. It might be a way to monitor rechargeable batteries in real time, preventing loss of performance and runaway explosions.

"We believe these methods could become important techniques for the development of better batteries," study researcher Alexej Jerschow, a chemistry professor at New York University, said in a statement.

Lithium-ion batteries provide juice for cellphones, laptops and other rechargeable devices. Most function fine, but lithium-ion batteries can occasionally fail spectacularly, causing explosions and fire. Most recently, Samsung announced a recall of its Galaxy Note 7 phone because the phone’s batteries were overheating and exploding.

One factor that contributes to this problem is the formation of deposits called dendrites, which grow from the lithium electrode. If these dendrites get large enough, they can contact the battery's second electrode and short-circuit the battery. [9 Odd Ways Your Tech Device May Injure You]

To understand this growth process, Jerschow and his colleagues developed a magnetic resonance imaging (MRI) technique to see inside the batteries as they are charging. The MRI actually images the electrolytes between the lithium electrodes (these electrolytes allow charge to move through the battery). Electrolytes become distorted around dendrites, the researchers found, and by imaging the distortions, the scientists could track the growth of dendrites in 3D. They reported their findings in September in the journal Proceedings of the National Academy of Sciences.

"The method examines the space and materials around dendrites, rather than the dendrites themselves," study author Andrew Ilott, a postdoctoral student at NYU, said in the statement. "As a result, the method is more universal. Moreover, we can examine structures formed by other metals, such as, for example, sodium or magnesium — materials that are currently considered as alternatives to lithium. The 3D images give us particular insights into the morphology and extent of the dendrites that can grow under different battery operating conditions."

Previous research has found that dendrites can form not only from the lithium electrode, but from nonconductive contaminants inside the electrolyte.