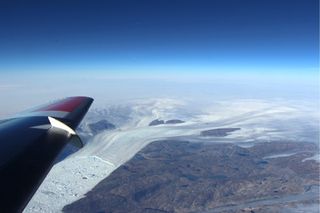 Helheim Glacier, with its characteristic wishbone-shaped channels, is one of Greenland's largest and fastest-melting glaciers.
(Image: © NASA/Operation IceBridge)

NASA is conducting science flights over Greenland to observe the impact of the summer melt season on the ice sheet.

Operation IceBridge, NASA's airborne survey of polar ice, uses a fleet of research aircraft to monitor the polar regions' annual changes due to climate change. The current Greenland mission, which lasts until Sept. 16, will mostly replicate an earlier survey from May so that scientists can observe any changes between spring and late summer.

"Earlier in IceBridge's history, we only surveyed the elevation of these glaciers once a year," Joe MacGregor, IceBridge's deputy project scientist, said in a statement. "Now we're starting to complete the picture of what happens to them as the year goes on, especially after most of the summer melting has already occurred, so we can measure their cumulative response to that melt." [Images: Greenland's Gorgeous Glaciers]

Consistently hotter temperatures have taken a toll on polar land and sea ice, and for more than a decade, global sea ice has been thinning and melting. In fact, NASA scientists have called these depleted ice levels the "new normal."

One of the priorities for the current IceBridge mission was to survey Helheim Glacier, which NASA carried out on Aug. 29. As one of Greenland's largest and fastest-melting glaciers, Helheim is closely monitored by scientists. The IceBridge team captured images of the glacier's characteristic wishbone-shaped channels from an altitude of about 20,000 feet (6,100 meters).

Operation IceBridge's summer campaign has included flights over glaciers along Greenland's northwest, southeast and southwest coasts so far. The IceBridge aircraft also retraced the Ice, Cloud and land Elevation Satellite's (ICESat) orbit over Greenland to compare how ice thickness has changed in the region.

As the IceBridge summer campaign nears its end, flights will cover critical areas in central and southern Greenland, including the world's fastest-moving glacier, Jakobshavn Isbræ.

Operation IceBridge's mission is to provide critical measurements on changing polar land and sea ice to bridge the gap between ICESat missions — the original ICESat mission operated from 2003 to 2009, and the planned ICESat-2 is scheduled to launch in 2018.