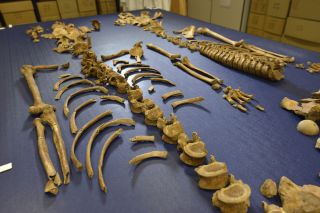 More than 350 years ago, thousands Scottish soldiers were captured during the English Civil War by the controversial British leader Oliver Cromwell. Many were kept as prisoners and were buried in mass graves when they died of disease and starvation.

Now, some of those soldiers will finally receive a more respectful resting place near Durham University, in northeast England, where the mass graves were found. Once research on the remains is complete, the soldiers will be reburied in a nearby cemetery in Durham, university officials announced in late August.

"The decision follows extensive consultation with a range of interested parties, including in the USA, where some of the surviving soldiers from the Battle of Dunbar were transported," the university said in a statement. [Photos: Mass Graves Hold 17th-Century Prisoners of War]

Archaeologists found the soldiers' remains in 2013, during an excavation at Durham University to clear the area for a library expansion. However, once archaeologists uncovered the skeletons, they halted work immediately.

The researchers unearthed human remains from two mass graves that were directly affected by the construction project. The graves hold an estimated 1,700 individuals, likely Scottish soldiers who were taken prisoner following the Battle of Dunbar in 1650, archaeologists told Live Science in May.

The mass graves are located on the city's World Heritage Site, as designated by the United Nations Educational, Scientific and Cultural Organization (UNESCO). Though the recovered remains will no longer be buried at the UNESCO site, a plaque commemorating them will be placed nearby, and a commemorative event will be held later this year, university officials said.

The final burials will take place after archaeologists have finished studying the soldiers' remains in late 2017. However, Durham University plans to keep a few teeth so that researchers can study them down the line, when new techniques and opportunities become available, according to university officials.

The decision to retain the teeth was not made lightly, and was approved by the university’s Executive Committee and the University Ethics Advisory Committee, according to a statement from the school. It was also a difficult decision to determine where to bury the bodies, especially because they were likely Scottish, not English, the university said. [8 Grisly Archaeological Discoveries]

But it was considered to be "morally appropriate" to keep the individuals as close to their comrades as possible, according to the university. Moreover, the United Kingdom’s Ministry of Justice asks that reburials be near to original burial sites.

"The decision on where to rebury the soldiers was very complex," David Cowling, pro-vice-chancellor of arts and humanities at Durham University, said in the statement. "We were acutely aware of the strength and depth of interest amongst many about the fate of these soldiers, whilst at the same time recognizing our ethical, moral and legal obligations."

In the end, they felt that "the case for reburying the remains in Durham was strongest," Cowling said.

The team even consulted with people in the United States, some of whom are descendants of surviving soldiers from the Battle of Dunbar. After the battle, thousands of soldiers were marched more than 100 miles (160 kilometers) from southeast Scotland to Durham, university officials said. About 3,000 of the soldiers were held at Durham Cathedral and Castle. Those who survived imprisonment were shipped around the world, including to Virginia and New England, where they worked as indentured servants, the officials said.

"It has been hugely rewarding to see the level of interest in the Scottish Soldiers Archaeology Project both in the U.K. and the USA," said Chris Gerrard, head of the project team and a professor at Durham University.