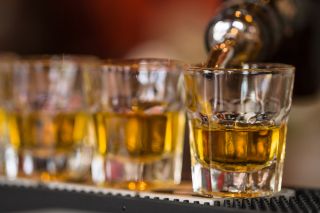 The ability to resist drinking alcohol when the urge strikes may partly rely on a certain enzyme in the brain, and alcohol use and dependency may reduce the levels of this enzyme, a new study in rats finds.

Some people can't seem to stop drinking, even when consuming alcohol affects them negatively. In the new study, researchers discovered that restricting the brain's production of an enzyme — called Prdm2 and found in the brain's frontal lobes — disrupted rats' impulse control. The animals then consumed more alcohol, even when the experience was unpleasant for them, the study authors found.

Although scientists have long suspected that brain activity in the frontal lobes was connected to alcohol dependency, this is the first evidence of a specific chemical process that could be linked to overconsumption of alcohol, and to alcohol use when an individual is stressed, the researchers said. [7 Ways Alcohol Affects Your Health]

The researchers also found that as the rats' dependency on alcohol increased, the animals' production of Prdm2 went down — and so did their impulse control. This prompted the animals to seek more alcohol despite its adverse effects. When the enzyme was less abundant in the animals' brains, the rodents were also more likely to search for and help themselves to alcohol in response to stress.

When scientists restricted the production of Prdm2 in rats that were not already dependent on alcohol, it resulted in similar types of behavior, reflecting a decrease in impulse control.

"We see how a single molecular manipulation gives rise to important characteristics of an addictive illness," study author Markus Heilig, professor of psychiatry and head of the Center for Social and Affective Neuroscience (CSAN) at Linköping University in Sweden, said in a statement.

Prior studies have suggested that in the early stages of human evolution, a taste for alcohol may have been beneficial, as it could have allowed humans' ancestors to extract nutrition from rotting or fermented fruit.

However, the idea that moderate drinking carries health benefits for people today may be a popular misconception. A recent review of 87 studies showed that the people who live the longest are those who limit drinking to a minimum.

The findings were published online Aug. 30 in the journal Molecular Psychiatry.