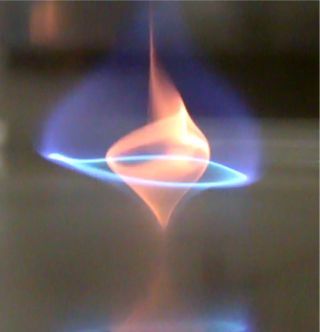 The otherwise-destructive fire tornado could be harnessed to burn fuel with reduced carbon emissions.
(Image: © University of Maryland)

A blue fire tornado sounds like it could be an alarming natural disaster, but this phenomenon could actually offer a way to burn fuel with reduced carbon emissions, a new study finds.

A fire tornado, or fire whirl, can occur during urban and wildland fires, threatening life, property and the surrounding environment. However, researchers have discovered a type of fire tornado they call a "blue whirl," and they said these flames have the ability to burn nearly soot-free.

Traditional, yellow fire whirls gain their color from radiating soot particles, according to study co-author Elaine Oran, a professor of engineering at the University of Maryland. Oran said the particles in yellow whirls form because there is not enough oxygen to burn the fuel completely. [Video: Watch a Blue Fire Tornado Spin]

"Blue in the whirl indicates there is enough oxygen for complete combustion, which means less or no soot, and is therefore a cleaner burn," Oran said in a statement.

The researchers were initially studying the combustion and burning dynamics of fire whirls on water. When they discovered the swirling blue flame, the researchers said they thought there could be a practical application for the fire tornado.

Reduced-emission combustion through the blue whirl could offer a solution to "the worldwide need to reduce emissions from both wanted and unwanted combustion," the scientists wrote in their study.

One potential application is to help clean up oil spills, the researchers said. Currently, one remediation technique is to corral the oil, creating a thick layer on the water's surface to be burned. But burning the oil this way is smoky, inefficient and incomplete, the researchers said. If blue whirls could be harnessed and controlled, oil-spill remediation-by-combustion could be greatly improved, they added.

"Fire whirls are more efficient than other forms of combustion, because they produce drastically increased heating to the surface of fuels, allowing them to burn faster and more completely," said study co-author Michael Gollner, an assistant professor of fire-protection engineering at the University of Maryland.

In the researchers' experiments over water, Gollner said, the blue whirls not only burn cleaner, but also help pull in the fuel due to the flames' circulation.

"If we can achieve a state akin to the blue whirl at larger scale, we can further reduce airborne emissions for a much cleaner means of spill cleanup," Gollner said.

The findings were published Aug. 4 in the journal Proceedings of the National Academy of Sciences.