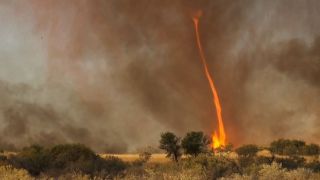 Filmmaker Chris Tangey captured rare video footage, a still of which is seen here, of a "fire devil" in the Australian Outback.
(Image: © Chris Tangey via Youtube user stilltalkincrazy)

Nature's not much for subtlety. Just ask Chris Tangey, the man who watched in awe as a 100-foot-high (30-meter-high) whirlwind of fire tore around a patch of Australian Outback on Tuesday (Sept. 11).

Tangey, a filmmaker, managed to capture some very rare footage of the startling phenomenon while out scouting locations near Alice Springs, Australia, according to The Australian.

One term for the event he recorded, a fire tornado, is a misnomer, according to Mark Wysocki, New York's state climatologist and a professor of atmospheric sciences at Cornell University. The columns of spinning fire are much more similar to dust devils than tornadoes, Wysocki said.

"I would just call them fire vortices but that doesn't sound so sexy to the public, so I would call them fire devils," he told Life's Little Mysteries.

Like the dust devils that spring up on clear, sunny days in the deserts of the Southwest, a fire devil is birthed when a disproportionately hot patch of ground sends up a plume of heated air. But while dust devils find their heat source in the sun, fire devils arise from hot spots in preexisting wildfires.

"These plumes form in a very small region over the land," Wysocki explained. "They start to rise very rapidly, and as things start to rise, they suck the surrounding air in like a vacuum. Then you get this twisting that begins to resemble a vortex."

As the vortex rises and sucks the blaze up with it, its diameter begins to shrink and, like an ice skater pulling in her limbs to gather speed in a spin, its rotation accelerates.

Though humans rarely witness fire devils, they may be more common than we think. Their most likely home, the blazing heart of a raging forest fire, is usually hidden from our view, Wysocki said.

Because fire devils are filmed even less often than they're seen, not much is known on the range of dimensions and speeds the phenomena can take on. Wysocki speculates that, on average, they extend a hundred feet (30 m) or so into the air and rotate with a speed in excess of 22 miles per hour (35.4 kilometers per hour). They're usually gone within a minute of shooting up.

Tangey's film might help to improve meteorologists' understanding of fire devils, according to Wysocki. He says a lot of scientists' knowledge on the physics of tornadoes came from analyzing footage caught by storm chasers.