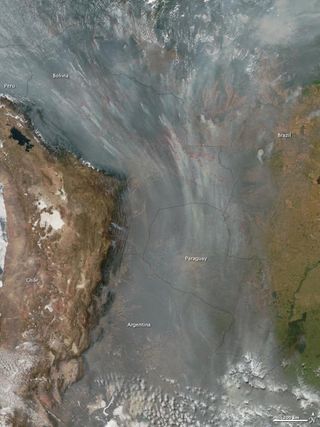 A rare fire tornado was spotted recently in the Brazilian city of Aracatuba.

The flaming dust devil, known colloquially as a fire devil, was captured on video, as reported by the U.K. Telegraph.

A three-month drought in the region has led to brush fires across Brazil, and when combined with the strong dry winds in the area, the conditions were perfect for creating the fire tornado.

Fire tornadoes, or fire whirls, ignite when a fire acquires a vertical rotating column of air. These weird weather events  can be more than a half a mile tall and contain winds over 100 mph (161 kph). Fire whirls may be whirlwinds separated from the flames, or a vortex of flame, itself.

During the 1923 Great Kanto earthquake in Japan, a firestorm gave birth to a gigantic fire tornado that killed 38,000 people in 15 minutes in the Hifukusho-Ato region of Tokyo, the Telegraph said.

Most fire tornadoes form during wildfires and help the wildfire spread. They may reach up to 200 feet (50 meters) tall, 10 feet (3 m) wide, but typically die out after a few minutes. Some of the largest, however, can reach up to half a mile tall, last for over 20 minutes, and have been known to uproot giant trees.