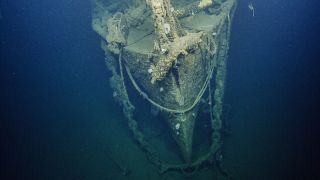 Here, the bow of the USS Independence seen during the robot sub survey in August 2016.
(Image: © OET/Nautilus Live)

More than 60 years after a World War II-era aircraft carrier sunk to the bottom of the sea, the word "Independence" could still be made out on its surface. By exploring the wreck with robotic subs, scientists are getting their first look at this decades-old ship, which was a target during atomic bomb tests at Bikini Atoll in the Pacific in the 1940s.

The exploration is already revealing secrets: Scientists operating the underwater robot discovered a fighter plane within the sunken aircraft carrier that, according to records, should not have been there. In addition, atomic blasts had caused significant damage to the carrier, which scientists mapped on this underwater mission.

The USS Independence was the lead ship of its class of light aircraft carriers that were critical during the American naval offensive in the Pacific during World War II. The vessel operated in the central and western Pacific between November 1943 and August 1945; torpedoes from Japanese aircraft demanded a stint away for repairs from January to July 1944 in San Francisco. [See Photos of the Sunken USS Independence Aircraft Carrier]

The Independence was later one of more than 90 vessels assembled as a target fleetfor the Bikini Atoll atomic bomb testsin 1946. The ship was placed within a half mile (800 meters) of ground zero for the first test there and, while damaged by shock waves, heat and radiation, the veteran ship did not sink. The highly radioactive Independence and dozens of other ships from the tests were then taken to Pearl Harbor and San Francisco for decontamination studies. [Video of the Robot Sub Dive]

After the Independence returned to the United States, the blast-damaged vessel was sunk deliberately in 1951 near San Francisco. "It was scuttled in a weapons test to determine the efficiency of two new types of torpedo warhead," James Delgado, director of maritime heritage at the National Oceanic and Atmospheric Administration (NOAA), said in a phone interview with Live Science from on board the exploration vessel Nautilus.

The Independence should no longer be significantly radioactive, according to Kai Vetter, a nuclear physicist at the University of California, Berkeley, Delgado said. Although the steel of Independence was radioactive after the atomic bomb tests, "steel has a seven-year half-life," Delgado said, meaning that about half of all the radioactive steel should have decayed after seven years. "The tests were about 70 years ago, which is 10 generations of half-lives, so at this point, it's less than 1 percent the original radioactivity. Vetter strongly feels that Independence poses no radiological risk to anyone, or the environment, or the equipment we're employing."

A 2015 survey found that the Independence was resting upright in 2,600 feet (790 meters) of water off California's Farallon Islands. Sonar images of the sunken carrier even suggested that a plane might be stuck inside the carrier's hangar bay.

First look at the Independence

On Aug. 22, scientists on board the Nautilus directed robot subs to analyze the wreck of the Independence. The vessel is currently on a four-month expedition to explore the eastern Pacific Ocean. Past expeditions have discovered other previously unseen shipwrecks, sea creatures and more. Nautilus is operated by the Ocean Exploration Trust, a nonprofit organization founded by oceanographer Robert Ballard.

Many scientists and other experts taking part in Nautilus expeditions have done so online in real time instead of crowding on board the ship. "It's like giving remote control over the starship Enterprise on a science mission," Delgado told Live Science. "We're able to connect not only with scientists, but also the public, interacting with them in real time, getting questions and getting feedback from them. At one point last night, there were people from 36 separate countries logged on as we were streaming live."

The Independence was amazingly intact, NOAA researchers said. "There have been some changes to it since it went to the bottom 65 years ago, but what we have been seeing very closely resembles the ship she was before she went underwater," Delgado said. "At the stern, we were still able to read, in traces of paint, 'Independence.'"

The scientists mapped the Independence. "First and foremost, we mapped atomic blast damage," Delgado said. "There were initially photographs and hand-drawn pictures of the damage after the tests, but our work gives us a more detailed sense of the damage."

The scientists confirmed that an airplane — an F6F-5N Hellcat fighter craft — was stuck inside the forward elevator of the Independence. "That's a plane that shouldn't be there," Delgado said. "Records indicated that all the aircraft on Independence were jettisoned except for two, which were presumably left on board during the atom bomb tests. The records said the two aircraft on Independence were studied and disposed of, but clearly, one was not, and perhaps the other is inside, too." [Photos: The 11 Fastest Military Aircraft]

The Hellcat "shows powerful signs of atom bomb damage," Delgado said. "Its wings are folded and broken. But you can still see the star painted on its wing. It's an interesting and welcome surprise to see."

The researchers also saw the aftermath of the torpedoes used to scuttle the Independence. "We could see the holes where torpedoes blasted in and through," Delgado said.

The Independence is the deepest of more than 400 shipwrecks in the Greater Farallones National Marine Sanctuary. The Nautilus is cruising around the rest of the 3,295-square-mile (8,534 square kilometers) sanctuary this week, which is largely unexplored in its deepest portions, the researchers said. The sanctuary is home to deep-sea coral and sponges, and investigating them may help scientists better understand the increasing acidification of the oceans.

Viewers can watch the work of the Nautilus live online at nautiluslive.org.