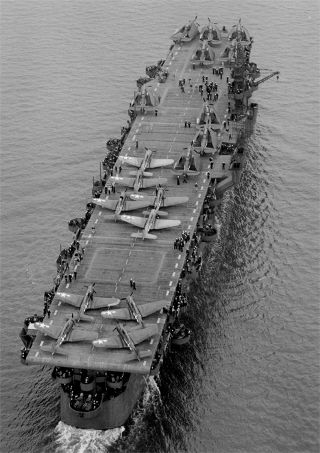 USS Independence operated in the Pacific from November 1943 through August 1945, later joining more than 90 vessels in the Bikini Atoll atomic bomb tests in 1946.
(Image: © National Archives)

Join researchers on a dive to the wreckage of the USS Independence, a World War II-era aircraft carrier that was deliberately sunk off San Francisco in 1951.

The research vessel E/V Nautilus will broadcast video live online tonight (Aug. 22), beginning between 7 and 9 p.m. ET, as the research vessel conducts the first visual survey of the Independence, the deepest shipwreck in in the Greater Farallones National Marine Sanctuary (GFNMS).

Last year, the National Oceanic and Atmospheric Administration (NOAA) acoustically mapped the wreckage, and scientists said the carrier is "amazingly intact." The mapping revealed the hull and flight deck were clearly visible. There also may be a plane in the carrier's hangar bay, according to the NOAA survey. The E/V Nautilus dive tonight will be the first visual survey of Independence. [Photos: World War II-era Aircraft Carrier Discovered]

The Navy continued decontamination studies on the Independence while it was moored at San Francisco's Hunters Point Naval Shipyard. The damaged carrier was eventually towed out to sea for scuttling on Jan. 26, 1951.

While in the national marine sanctuary, the E/V Nautilus will also research the area's ecosystem to provide scientists with a better baseline understanding of the area. Specifically, the research will characterize the habitat of deep-sea coral and sponges for future studies on ocean acidification monitoring and impacts.

Currently on a four-month expedition to explore the eastern Pacific Ocean, the E/V Nautilus' mission is to explore the oceans and seek out the unknown. Past expeditions have included the discoveries of other previously unseen shipwrecks, sea creatures and more. The vessel is operated by the Ocean Exploration Trust, a nonprofit organization founded by oceanographer Robert Ballard.