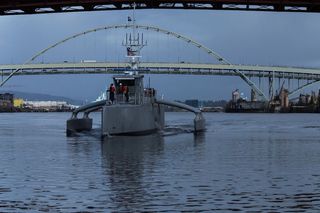 The world's first unmanned ship completed its first performance tests, and is set to join the US Navy in 2018 to hunt enemy submarines lurking in the deep.
(Image: © DARPA)

The ocean's newest predator, a robotic ship designed to help the U.S. military hunt enemy submarines, has completed its first tests at sea.

Called the "Sea Hunter," the 132-foot (40 meters) unmanned vessel is still getting its figurative sea legs, but the performance tests off the coast of San Diego have steered the project on a course to enter the U.S. Navy's fleet by 2018, according to the Defense Advanced Research Projects Agency (DARPA), the branch of the U.S. Department of Defense responsible for developing new technologies for the military.

The Sea Hunter "surpassed all performance objectives for speed, maneuverability, stability, seakeeping, acceleration/deceleration and fuel consumption," representatives from Leidos, the company developing the Sea Hunter, said in a statement.

The autonomous submarine-hunting ship was christened in April, and is part of a DARPA initiative to expand the use of artificial intelligence in the military. The drone ship's mission will be to seek out and neutralize enemy submarines, according to the agency. [Humanoid Robots to Flying Cars: 10 Coolest DARPA Technologies]

Initial tests required a pilot on the ship, but the Sea Hunter is designed for autonomous missions.

"When the Sea Hunter is fully operational, it will be able to stay at sea for three months with no crew and very little remote control, which can be done from thousands of miles away," Leidos officials said in the statement.

Advanced artificial intelligence software will continuously navigate the Sea Hunter safely around other ships and in rough waters, according to DARPA. The technology also allows for remote guidance if a specific mission requires it.

"It will still be sailors who are deciding how, when and where to use this new capability and the technology that has made it possible," Scott Littlefield, DARPA program manager, said in a statement when the Sea Hunter was christened.

The Sea Hunter still faces a two-year test program, co-sponsored by DARPA and the Office of Naval Research. Leidos said upcoming tests will include assessments of the ship's sensors, the vessel's autonomous controls and more.

Other DARPA projects being driven by AI include a potential robot battlefield manager that helps decide the next move in a space war, and an AI technology that could decode enemy messages during air reconnaissance missions.