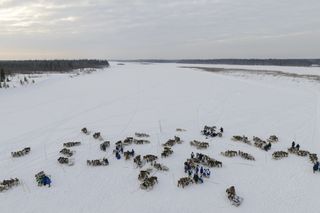 The national holiday "Reindeer Herder's Day" being celebrated on the Yamal Peninsula in Siberia in February 2016.
(Image: © Vladimir Kovalchuk / Shutterstock.com)

An outbreak of anthrax that has killed more than 2,000 reindeer and sickened 13 people in Siberia has been linked to 75-year-old anthrax spores released by melting permafrost.

It's an event of the sort many scientists have warned about: Warming temperatures reviving dormant diseases, perhaps even pathogens long-thought extinct. There are, however, ways to protect both livestock and humans from an anthrax infection, and the current outbreak is likely to end quickly, said George Stewart, a medical bacteriologist at the University of Missouri College of Veterinary Medicine.

The anthrax currently infecting reindeer and people in western Siberia likely came from the carcass of a reindeer that died in an anthrax outbreak 75 years ago and has been frozen ever since — until an unusually warm summer thawed permafrost across the region this year, according to local officials.

Bacillus anthracis, the bacteria that cause anthrax, are capable of surviving in the soil for centuries, so it's no surprise that melting permafrost could resurrect a long-dormant plague, Stewart said. Anthrax spreads through soil. Grazing animals pick up the bacteria, which quickly gain a toehold and start reproducing like mad in the animals' blood. Unlike many pathogens, which aim to keep the host alive long enough to reproduce, anthrax wants to kill, and it produces toxins to do so, Stewart said. That's because anthrax demands a dead and decomposing host to spread: Once oxygen enters the rotting animal, the bacteria transform into spores.

"Spores are basically a bacterial cell in a really tough protein shell," Stewart said. They're in a state of suspended animation, and they stay that way in the soil until another grazer accidentally ingests them.

In the United States, anthrax occasionally pops up along the cattle trails of the Old West, Stewart said, because cows stricken with anthrax were left to rot.

Because anthrax is so hardy, it's no surprise that it could survive in permafrost. Researchers warned in 2011 in the journal Global Health Action that outbreaks such as this one could become common as the remains of livestock killed in earlier outbreaks thaw. There are also fears that other pathogens may lurk in the frozen soil of Siberia. In 2015, researchers discovered that a 30,000-year-old virus isolated from permafrost was still infectious (though, fortunately, not dangerous to humans).

The humans infected with anthrax in the Siberia outbreak likely got it from butchering and eating infected animals, Stewart said. There are three forms of human anthrax, he said. About 80 percent of cases are cutaneous, or introduced through the skin. These cases are eminently treatable with antibiotics and have a mortality rate of 10 to 20 percent if left untreated.

Pulmonary anthrax occurs when the spores are inhaled. Without treatment, pulmonary anthrax is almost always fatal, Stewart said. During the 2001 anthrax attacks, in which someone mailed anthrax spores to politicians and news media offices, 22 people were infected and five died.

The rarest form of human anthrax, gastrointestinal anthrax, is the form that has sickened people in Siberia, killing one 12-year-old boy. It's hard to pinpoint the mortality rate of gastrointestinal anthrax, because it's rare and people usually aren't diagnosed until late in the disease, Stewart said. But if left untreated, this form probably causes between 50 and 75 percent of patients to die. According to local news reports, 90 nomadic people have been tested for the disease as a precaution so that anyone who is infected can start treatment quickly.

In places where anthrax is a known threat, cattle get vaccinations, Stewart said. Outbreaks can also be quelled by burning livestock that died of the disease, or burying corpses very deep in the ground so that spores won't penetrate to the surface.