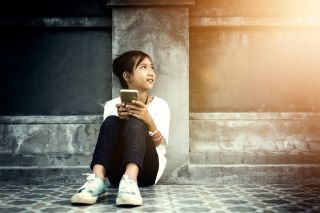 With its characters, Chinese definitely saves space, but is it also fast to type or text in?
(Image: © PhuShutter / Shutterstock.com)

If you want to save space, write in Chinese.

The payoff of those labyrinthine characters is that they can fit a lot of information into a small symbol.

For example, here's the same sentence in English and Chinese:

What time did you get up in the morning?

If it's books you're publishing, you'll be saving trees. If it's tweets, there's still a long way to 140 characters.

Of course, the other side of the bargain is that, since the Bronze Age, literate Chinese people have had to spend years of their lives memorizing thousands of ornate figures.

But in 2016, you can live most of your life on a screen, so the difficulty of writing a language by hand is losing relevance. Rather, what matters more to a lot of people is how easy it is to type and text.

Ease of typing in Chinese

In the case of Chinese, the 3,500-year commitment seems to have paid off. The language types like a dream. [Related: What's the Hardest Language to Learn?]

It uses a no-frills grammar systemand eschews spacing altogether. And because of the challenges posed by thousands of unique characters, Chinese engineers have been forced to push software to its real potential. Case in point: On both keyboards and touch screens, Chinese people favor sophisticated predictive input tools, whereas the West mostly falls back on what-you-hit-is-what-you-get typing — a method that does a nice job of simulating a typewriter but doesn't explore any of the more agile solutions that software might open up.

With the most popular Chinese input tool, you write out a word with a phonetic alphabet called pinyin, and then select from a pop-up menu of characters that you're likely looking for. The twist: For many phrases, the only information necessary is the initial letter of each character (technically, the initial letter of the character's phonetic spelling), so you can write whole sentences with just a few letters.

For example, if you want to write "Have you eaten yet?" in Chinese, you just key in "nclm," a first-letter-only version of the phrase "Ni chi le ma?" which would be called up as the corresponding characters on your screen.

For "The air pollution is pretty severe today," just hit "jtkqwrhyz," and the characters corresponding to the phrase "Jin-tian kong-qi wu-ran hen yan-zhong" will be the first suggestion.

It's sort of like being able to type whole sentences in "ttyl"- or "lol"-style text speak, but the end result is still proper Chinese. So the same tool can be used for chats and professional emails, too.

The system does have weak spots, especially when it comes to unusual characters, and there are plenty of predictive input tools available in English as well. But even if typists of both languages were using predictive software and hitting keys at the same speed, a Chinese typist might still have an edge. Chinese can often convey an idea more concisely;  and on top of that, the character system offers a natural way to break down words into their component chunks, which is ideal for giving a predictive tool an info-rich outline of a word or phrase.

As an example, compare the word "beautiful" and its Chinese equivalent, "美丽." The Chinese word can be easily separated into its two component characters , whose initials can then be used to sketch the word for a piece of software, while in English there's no obvious rule for how to reduce words to a few key joints.

It raises the question, then, whether there's a written language that's even better suited to digital communication — one whose compactness, or amenability to predictive input software, makes it the internet generation's optimal writing system.

The United Nations' Universal Declaration of Human Rights is available in 475 languages and counting. A comparison of translations of the document based on character count shows that languages with thousands of distinct symbols at their disposal — such as Japanese, Chinese and Korean — have an advantage in compressing their communications. Of those, Chinese seems to be the language to beat (even after accounting for its lack of spaces), according to an informal survey. [Related: 25% of the World's Languages Are Threatened]

Nuosu, an ancient logographic language used by the Yi ethnic group in southwest China, is Chinese's closest rival in this "fast-texting competition." (Logographic languages are those in which each symbol or letter represents an entire word.) Vowel-eliding Hebrew and Arabic also have below-average character counts. Meanwhile, the Wamma language of Benin stands out for getting an unusual amount of value-per-character out of the Latin alphabet.

But the Universal Declaration of Human Rights is just one text, written in a specific style, and then translated by specific people who each made their own choices. And character count alone doesn't give much insight into the speed at which a writing system might be used to communicate in the real world, especially when you add performance-enhancing software to the mix.

As software gets better at guessing the words texters are looking for before they even get to them, there's a variable in typing efficiency that could be more important than a language's concision: its innate predictability. [Related: Adding Additional Languages to an Android Tablet]

Languages vary both by the number of words in everyday circulation and by the range of permissible sequences for arranging those words. These features contribute to what linguists and information theorists call a language's entropy, where highly predictable languages are said to have low entropy and vice versa.

In general, the lower a language's entropy is, the easier it is to model with a computer, and thus the easier it should be to conquer with time-saving predictive input tools, according to Steven Piantadosi, head of the University of Rochester's Computation and Language Lab.

In a study published online in 2011 in the journal PLOS ONE, Marcelo Montemurro of the University of Manchester in the U.K. and a colleague estimated entropy values for groups of texts from eight languages, including English, French, German, Finnish, Tagalog, Chinese, Sumerian cuneiform and Egyptian hieroglyphs. Among these, Sumerian showed the lowest entropy, followed by Egyptian, Tagalog and Chinese, suggesting that ancient Sumerian and Egyptian writing systems might make for fast typing if anyone cared to use them.

But Piantadosi cautions that comparing entropy across languages is not easy.

"There is one big complication, which is that the methods we use to estimate entropy may not be 'fair' across languages," he wrote in an email to Live Science.

There's one predictive model that suits every language: the brain of a native speaker.

"One way to get around this problem is to use a psychological notion of predictability — have people guess the next word," Piantadosi wrote. "[This method] almost certainly reflects a closer estimate to the 'true' predictability of a language."

There's a name for this type of guessing game, in which players guess words or letters based on those that precede them in a sequence. It's called the Shannon Game, after mathematician Claude Shannon, considered to be the father of information theory.

Until speakers of the world's languages put in some hard hours playing the Shannon Game and produce accurate estimates for the entropies of their native tongues, the question of which language is the fastest to type is still anybody's ________.