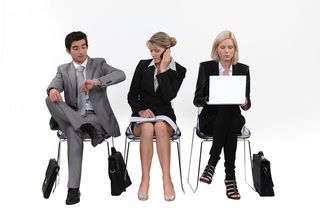 Exercising for an hour a day may be enough to counteract the harmful effects of sitting for long periods, a new study from Norway finds.

The results show that people who sit for more than 8 hours a day, but who also exercise for 60 to 75 minutes a day, are not at increased risk for early death, compared to people who sat for less than 4 hours a day and reported high levels of physical activity.

"There has been a lot of concern about the health risks associated with today's more sedentary lifestyles," study co-author Ulf Ekelund, a professor of sport medicine at the Norwegian School of Sports Sciences in Oslo, said in a statement. “Our message is a positive one: it is possible to reduce — or even eliminate — these risks if we are active enough." [5 Tips for Sitting Less During Your Work Day]

Many studies have found a link between sitting for long periods and an increased risk of chronic diseases (including cancer, diabetes and heart disease), and dying early. But it hasn't been clear if engaging in a certain level of activity when people aren't sitting could reduce or eliminate these risks, the researchers said.

In the new study, the researchers analyzed information from a total of more than 1 million healthy people who took part in 16 studies conducted in eight countries (Canada, the United States, Australia, Spain, Denmark, Norway, the United Kingdom and Japan). The participants were mostly over age 45, and were followed for two to 18 years. During the study period, 84,600 people died.

There was a strong link between sitting for long periods and an increased risk of early death, the researchers found. But greater levels of physical activity reduced, or in some cases completely offset, this risk.

For example, people who sat for 8 hours a day, but who exercised for 25 to 35 minutes every day, had about a 30 percent increased risk of early death (compared to a 59 percent increased risk for those who got less than 5 minutes of exercise per day). Only those people who exercised for 1 hour or more every day were able to eliminate the risks of sitting for more than 8 hours.

"I think this is good news," said Dr. Edward Laskowski, co-director of the Mayo Clinic Sports Medicine Center in Rochester, Minnesota, who was not involved in the study. It shows that "you can mitigate and compensate for some of these bad effects" of sitting, Laskowski said. In this way, exercise might be considered a kind of "treatment" for people who have sedentary jobs, he added.

But people should still aim to reduce their sitting time as much as they can. "We still want to make efforts to reduce the amount of sitting time in general," Laskowski told Live Science. "The more we move, the better."

The study also found that watching TV may be a particularly harmful form of sitting. People who watched TV for 3 hours or more a day were at increased risk for early death (regardless of how much total time they spent sitting), except if they were in the highest-activity group (which got 60 to 75 minutes of exercise a day). But even for people in the highest-activity group, watching TV for 5 or more hours a day was linked with an increased risk of early death.

It's possible that TV watching is riskier than just sitting because it's often accompanied by snacking, and people may be exposed to ads for junk food that affect their eating behavior, the researchers said.

The study included healthy people, so it's unlikely that illness was the reason for people's sedentary behavior, but the study could not completely rule out the effect of illness on the findings.

The study was published online today (July 27) in the journal The Lancet.