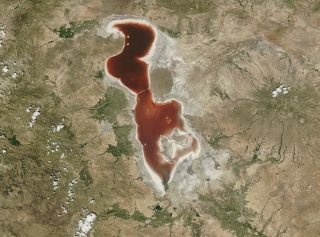 Lake Urmia in Iran turned from green to red in just a few months, as increasing salinity in the water spurred the growth or organisms producing red pigment.
(Image: © NASA Earth Observatory)

Iran's briny Lake Urmia recently appeared in satellite images with blood-red waters resembling the aftermath of a particularly gruesome crime scene — and the perpetrators are likely microorganisms that thrive on salt and light.

As water levels in the lake have receded over the summer months, salt concentration in the water has gone up, according to NASA. Lake Urmia's deep-red tones, captured on July 18 by the agency's Moderate Resolution Imaging Spectroradiometer (MODIS) instrument on the Aqua satellite, are thought to be a byproduct of certain bacteria and algae in the lake that thrive in high-salt conditions.

The lake, which lies near the border Iran shares with Turkey, held a green tint when photographed by MODIS on April 23. Just a few months later, it looks more like a puddle of spilled red wine — or blood. [The Strangest Places on Earth (Photos)]

This color shift has been observed in Lake Urmia before, triggered by seasonal changes. Snowmelt and rainfall in the spring infuse the lake with fresh water, keeping salt levels down. But as summer progresses, fresh water ceases to flow into the lake, and evaporation increases the water's saltiness.

That's when certain microorganisms can gain the upper hand in the lake ecosystem. Scientists point to a bacteria family called Halobacteriaceae and the algae family Dunaliella as the most likely suspects for Lake Urmia's current crimson color, according to NASA's Earth Observatory.

The algae Dunaliella salina was previously implicated by researchers for staining Lake Urmia blood red in earlier years, Mohammad Tourian, a scientist at the University of Stuttgart in Germany, said in a statement.

"In conditions of high salinity and light intensity, the microalgae turns red due to the production of protective carotenoids in the cells," he said.

However, NASA's Earth Observatory added in a statement, salt-loving bacteria Halobacteriaceae could also be the guilty party. Halobacteriaceae produces a ruby pigment, and if the bacteria's populations are big enough, they can redden large bodies of water.

In fact, microbial miscreants have left scarlet stains in waters elsewhere around the world.

Antarctica's scarlet Blood Falls present a gory contrast to the pallid ice surrounding them. The falls' intense color comes from bacteria inhabiting the exceptionally briny water that seeps from underneath the glacier.

The high-saline Great Salt Lake in Utah blushes a rosy pink, courtesy of its salt-loving arachaea microbes. And in 2014, algae carried by rainfall produced crimson fountain water in a town in northwest Spain.

Climate change is also fueling the rise of algae that stain European lakes and waterways with sanguine hues, and their presence in warming waters can be damaging as well as gruesome-looking. So-called "blood algae" produce toxins that contaminate drinking supplies, a recent study found, and the algae can suffocate fish by using up oxygen in the water.