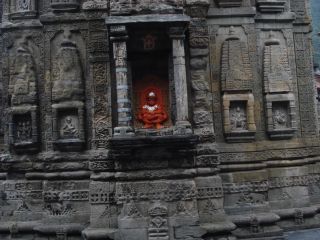 A damaged and clamped pillar at the Lakshmi Narayan Temple in the Chamba region of India is a sign of a past earthquake. The damage likely occurred hundreds of years ago, meaning the nearby fault has had a lot of time to build up stress.
(Image: © Mayank Joshi)

Past earthquakes that damaged ancient temples perched high in the Himalayas could be harbingers of dangerous quakes to come, new research suggests.

"The supporting pillars and temple structures are tilted with respect to their original positions. The rooftop portion shows tilting or displacement. The bricks of the wall are cracked. The floor stone shows up-warping," said study co-author Mayank Joshi, a geologist with the Wadia Institute of Himalayan Geology in India.

The area, a picturesque, tourist mountain town in Himachal Pradesh, is sandwiched between two regions where catastrophic earthquakes have killed tens of thousands of people. But researchers didn't think this area was at high risk until now. The findings suggest that the region is overdue for a major earthquake. [The 10 Biggest Earthquakes in History]

The area near the Himalayas is laced with terrifying faults. In 2005, a magnitude-7.6 earthquake shook a region of Pakistan called Azad Kashmir, killing 86,000 people and displacing millions. And in 1905, a magnitude-7.8 quake rattled the Kangra Valley in Punjab, India, killing 20,000 people.

But sandwiched between these two regions is the picturesque mountain town of Chamba, and it sustained no damage in these earthquakes. As such, the researchers wanted to know whether the region also faces a large earthquake risk.

The team analyzed most ancient structures in the region: intricately carved Hindu temples that were built by rulers of the ancient Chamba Kingdom between the seventh and eleventh centuries. Among the most notable are the stone Lakshmi Narayan temples and the wooden Bharmour Chitrari temples, which were built around the year 680.

Of course, it can be difficult to determine what causes pillars to tilt and floors to deform. But it turns out that the waves rippling out from an earthquake travel in a clear orientation that can make earthquake damage easy to identify, the researchers said.

"In case of the ground settling, there would not be a preferred orientation. It will be randomly oriented," Joshi told Live Science in an email.

Next, the team pored through the historical record to uncover the history of this Himalayan fault region. The researchers found evidence in the historical accounts of Tarikh-i-Kashmir and the Tabaqat-i-Akbari, which were written Medieval Indian and Kashmiri sultanate writers,  that a 1555 quake rattled the Srinagar Valley, about 120 miles (200 kilometers) northwest, and sent aftershocks through the region for days.

"This was a destructive earthquake in Kashmir, which ruined towns, killed several hundred people and changed the course of the River Vesha, a tributary of the Jhelum," the researchers wrote in their paper.

Yet, after this event, there was no major quake in the region, suggesting that the nearby fault could have built up quite a bit of stress in the last several hundred years, the researchers said.

"This shows that the area has enough potential to produce great earthquakes similar to [the] 2005 Kashmir earthquake," Joshi said.

Now that the region's earthquake risk has been identified, it's up to engineers to build structures that are safe enough to withstand such an event, Joshi added.