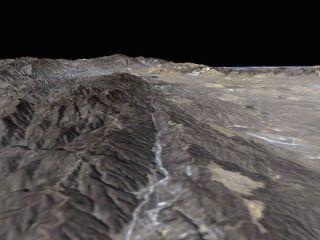 The space shuttle Endeavor captured this image of the San Andreas Fault on Feb. 11, 2000.
(Image: © NASA/JPL/NIMA)

The same tides that affect ocean waves can trigger earthquakes along California's San Andreas Fault, and scientists unexpectedly find that these quakes are more likely to happen as tides are strengthening, not when they are at their strongest.

The rise and fall of the seas, tides are caused primarily by the gravitational pull of the moon and sun on Earth. These gravitational tugs not only influence the seas but also stone, alternately stretching and compressing Earth's crust.

Previous research found that the tidal effects on Earth's crust could trigger both tremors and earthquakes. When this shaking occurs, it can reveal details about the deep roots of faults, which, in turn, could enrich models that might illuminate when earthquakes will happen. [50 Interesting Facts About Earth]

The studyꞌs scientists were interested in how the planet's tides might affect small, deep seismic events known as low-frequency earthquakes. They focused on 81,000 catalogued low-frequency earthquakes that struck along California's San Andreas Fault between 2008 and 2015. These quakes are no larger than about magnitude 1 on the Richter scale, said study lead author Nicholas van der Elst, a seismologist and geophysicist at the U.S. Geological Survey's Earthquake Science Center in Pasadena, California.

"We looked at a part of the fault that's weak, and so responds to tiny forces exerted by tides," van der Elst said.

Tidal strength varies over a two-week, or "fortnightly," cycle. The strongest "spring" tides occur when the moon and sun are aligned, while the weakest "neap" tides happen when the sun and moon are perpendicular to one another with respect to Earth.

Surprisingly, the number of low-frequency earthquakes did not spike at the strongest point of the fortnightly cycle. Instead, they peaked as the fortnightly tide was waxing, or strengthening.

Specifically, these quakes were most likely to happen on the days where tides "were larger than the previous day's tides by the greatest amount," van der Elst told Live Science. "That tells you something about how fast the fault is loaded — how long it takes for the fault to recharge before you can trigger these earthquakes on it, how quickly this patch of fault is accumulating stress."

The deep sections of the San Andreas Fault that the scientists investigated are separate from the shallow portions of the fault most likely to produce major earthquakes, van der Elst said. Still, "every little thing we learn about the way faults work may ultimately contribute to a better understanding of the earthquake cycle and when and where big earthquakes are likely to happen," he said. "The hope is that looking at low-frequency earthquakes that happen deep in the fault will ultimately shed light on how shallow parts of the fault accumulate stress."

The scientists detailed their findings online July 18 in the journal Proceedings of the National Academy of Sciences.