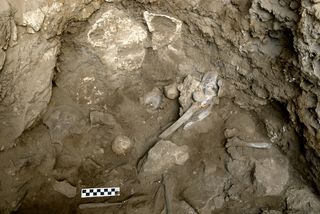 Bones of a mysterious woman in a burial site were surrounded by tortoise shells and other objects.
(Image: © Naftali Hilger)

A diminutive woman buried in a cave in Israel 12,000 years ago was likely a person of importance and was interred with great ceremony, including a feast of 86 tortoises, archaeological evidence suggests.

After years of analysis, experts have reconstructed the stages of a funeral ritual performed as the body was laid to rest, piecing together the chain of events with the help of unusual objects that were found at the burial site.

The researchers described a six-step process that acknowledged the respected position that the woman held in life, and hints at the complexity of burial rituals practiced in the region thousands of years in the past. [The Science of Death: 10 Tales from the Crypt & Beyond]

Study lead author Leore Grosman, a professor at the Institute of Archaeology at the Hebrew University of Jerusalem, discovered the grave in 2005, in a cave called Hilazon Tachtit, located in western Galilee in northern Israel.

The cave served as a burial ground for at least 28 people during the latter part of the Natufian period (15,000 – 11,500 B.C.), according to a study Grosman co-authored in 2008, published in the Proceedings of the National Academy of Sciences.

And one grave stood out, separated from other graves by a stone divider, and with the body and objects around it arranged with particular care and intent.

The skeleton of a woman about 4 feet 9 inches (1.5 meters) tall and about 45 years old had been carefully placed in a grave pit layered with sediment, seashells, tortoise shells, chalk and bony horn cores from gazelles. Arranged around and upon her body were bones representing a number of animals: marten skulls, a wild cow tail, a boar's forearm, a leopard's pelvis, an eagle's wing and a human foot.

In a statement, Grosman described the occupant of the grave as "probably a shaman," based on the variety of animal bones surrounding her, because shamans of the time were believed to commune with animal spirits.

A shaman's funeral, in 6 steps

Grosman and study co-author Natalie Munro, a professor in the anthropology department at the University of Connecticut, analyzed the contents of the grave and determined the ritual sequence — six stages — that likely accompanied the woman's burial.

For the first stage — preparing the grave pit — attendants marked a symmetrical oval shape in the bedrock of the cave floor, then broke up the bedrock in large chunks with a type of drill. Next, they covered the floor and walls of the pit with mud, adding layers of limestone and other sediments.

The second and third stages involved lining the pit with limestone blocks and "unique artifacts," such as shells, gazelle horn cores and tortoise carapaces, and then covering the artifacts with a layer of ash and debris from chipped stone tools.

During stage four, the woman's corpse was placed in the pit in a squatting position, with tortoise shells inserted underneath the head and pelvis where they rested against the grave's walls. Animal bones and more tortoise shells were positioned atop and around the body, topped by several limestone blocks.

Dozens of tortoise shells included in this layer represent animals that were eaten during a ritual meal, during which the authors estimated that funeral attendants consumed about 55 pounds (25 kilograms) of meat.

For stage five, attendants filled the grave with garbage from the funeral feast, according to the researchers. And finally, for stage six, a large triangular block of limestone was positioned at the top of the grave.

"The significant preplanning implies that there was a defined 'to do' list, and a working plan of ritual actions and their order," Grosman said in a statement.

According to the authors, the Natufian period is recognized as a time when human burials began emerging as an important cultural practice within the community. Evidence from this study suggests that rituals were carefully planned and highly organized, hinting at the complexity of ancient roles and societies.

The findings were published online April 26 in the journal Current Anthropology.