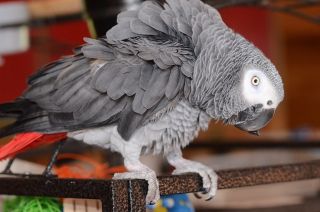 The African grey parrot Igor (not the bird involved in the murder case) has a scissor beak and a deformed spine, but is absolutely charming, said Ann Brooks, CEO and founder of Phoenix Landing.
(Image: © Phoenix Landing Foundation)

Bird scientists are skeptical whether Bud, an African grey parrot who allegedly witnessed a murder in 2015 in Michigan, can give reliable testimony or spoken evidence at a court trial.

That's not because African grey parrots aren't intelligent — the birds can be trained to do simple math, speak with enormous vocabularies and demonstrate impressive inferential reasoning. Rather, it's unclear whether Bud is repeating a conversation from the murder itself, or whether he heard it on TV, the radio or from another time in his life, experts told Live Science.

"We don't know where that conversation could have come from," said Erin Colbert-White, an assistant professor of psychology at the University of Puget Sound in Tacoma, Washington, who works with African grey parrots. [Pretty Bird: Images of a Clever Parrot]

The murder case, which is gaining nationwide attention, involves Martin Duram, 45, who was found dead from five gunshot wounds in May 2015. His wife, Glenna Duram, 48, is a suspect, according to the Detroit Free Press.

The Duram family owned Bud at the time of the murder, but Martin Duram's ex-wife, Christine Keller, now cares for the parrot. Several weeks after Duram died, Keller heard Bud speaking in both male and female voices as if having a conversation, the Free Press reported.

The parrot, in a man's voice, said "Get out," followed by the woman's voice saying, "Where will I go?" The man's voice answered, "Don't f---ing shoot," the Free Press reported.

Keller alerted the case's prosecuting attorney, who said he wasn't aware of a precedent allowing a parrot into a trial, but would look into whether Bud could serve as admissible evidence, the Free Press reported.

Bud undoubtedly has a way with words, but experts doubt that this feathered chatterbox can give reliable testimony or offer evidence in a trial.

"Basically, the issue is whether a parrot can learn a phrase that it has heard only once," said Irene Pepperberg, a research associate in the department of psychology at Harvard University, and author of "Alex & Me: How a Scientist and a Parrot Discovered a Hidden World of Animal Intelligence — and Formed a Deep Bond in the Process" (Collins Publishers, 2008).

"The general answer is 'no,' because the bird needs considerable practice to reproduce the sounds of English speech," Pepperberg told Live Science in an email. "A bird might learn a single word quickly, but only if it already has the specific sounds in its repertoire."

For instance, Alex, also an African grey parrot, learned the word "carrot" after one training session, but he already knew the words "key" and "parrot," which likely made it easier to learn the new word, she said. Moreover, whole conversations are even harder to learn after hearing them just once, Pepperberg said.

"The only evidence that a bird could learn a phrase heard once, under stress, comes from [the deceased] Nobel Laureate Konrad Lorenz," she said. "His cockatoo was horridly frightened by a chimney sweep, and afterward would call out 'The sweep is coming!' whenever it saw someone entirely in black."

It's possible, "but quite unlikely" that Bud overheard and repeated that conversation from the murder, Pepperberg said. [The 5 Smartest Non-Primates on the Planet]

In humans, a traumatic event, such as the Kennedy assassination or 9/11, can make a memory stronger. Some experts call this "flashbulb memory," Colbert-White said.

It's unclear whether parrots have flashbulb memory, but if they do, perhaps Bud distinctly remembered that conversation because it happened right before the murder, she said.

Furthermore, the Free Press reported that it took the bird several weeks before he voiced that conversation, "which is actually on par with parrots bringing in a new vocalization into their repertoire," Colbert-White said.

However, the conversation's origin may remain a mystery, she said.

This isn't the first time a parrot has been involved in solving a murder case. On Christmas Eve in 2001, a man was beaten and killed in Dallas. His cockatoo (a type of parrot) attacked the assailant, drawing blood, which ended up on the wall. A DNA analysis, among other clues in the case, helped convict the killer, one of the Texas man's former employees at his pool company, according to BBC News.