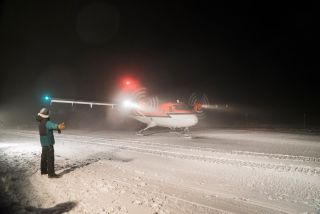 Winter in Antarctica is lonely. Each year, only a handful of people stay on the continent to keep research stations running. They're mostly on their own — even if they're suddenly grappling with a medical issue.

On occasion, though, a serious medical event requires a rescue attempt. The latest is ongoing: On June 21, a Twin Otter aircraft arrived at the National Science Foundation's (NSF) Amundsen-Scott South Pole Station to evacuate a sick member of the overwintering team. The NSF Division of Polar Programs announced today that the plane left the South Pole station and landed safely at the British Rothera station, some 1,500 miles (2,400 kilometers) away.

The NSF has not released the name of the sick worker, nor the condition that necessitated the rescue, but past experience suggests that it must be serious: Researchers and staffers have coped with conditions ranging from breast cancer to stroke without having to resort to evacuations. That's because the danger of landing a plane in the icy Antarctic winter can't be understated. [In Images: Antarctic Explorer Robert Falcon Scott's Last Photos]

Forty-eight people are spending the winter at the Amundsen-Scott station, according to a website dedicated to station news and history. The cold is unimaginable; according to the National Weather Service, it was minus 79 degrees Fahrenheit (minus 62 degrees Celsius) at 2 p.m. EDT on June 22. The weather was listed, simply, as "ice crystals."

That means that it's so cold that the moisture in the air freezes, said Air National Guard Col. Ronnie Smith, who flew rescue and resupply missions for the U.S. Air Force in the polar regions and wrote a book of poetry about his experiences, "The Last White Ruby: The Vanishing Polar Circles" (BookBaby, 2015).

Not that there's any sun at the South Pole now. It sets in March and doesn't peek above the horizon again until September. Dark is one of the challenges a pilot trying to land in the Amundsen-Scott station must face. During the first midwinter landing at the Pole — which took place in April 2001 — the airplane's path was lit by two rows of trash burning in barrels alongside the runway, according to a history of the event in the book "Amazing Flights and Flyers" (Frontenac House, 2010).

Cold is another big challenge for any pilot hoping to land in the Antarctic winter. Temperatures that can dip into the negative triple digits can freeze jet fuel into slush, according to the Wisconsin IceCube South Pole Neutrino Observatory. Hydraulic fluid starts to gel at around minus 72.4 degrees Fahrenheit (minus 58 degrees C), Smith said. Twin Otters, the planes that are used to fly these risky rescue missions, have parts that are almost entirely mechanical, helping them avoid locked-up hydraulics.

As if cold and dark weren't enough, Antarctica's winters are notoriously fickle.

"You have weather that is so extreme," Smith said. "I mean, it can go down to minus 120 degrees Fahrenheit (minus 84 degrees C). The winds can be hurricane-force winds and they often are, especially in the winter."

And the wind doesn't even have to be that strong to make flying impossible. Gusts of only 20 knots, or around 23 mph (37 km/h), can obscure visibility with blowing snow, Smith said.

"Once it becomes minus 40 degrees, the crystal structure of the snow changes to where the snow is like sand," Smith said. "It's light, it's dry, and it's easily lifted into the air by a breeze."

To compound the problem, weather data is spotty at the Pole, Smith said. Weather satellites don't orbit directly over the poles, so atmospheric data is available for only part of the day. And storms can pop up in a matter of hours.

"From the time they took off in Rothera, everything can change by the time they get to the Pole," Smith said of the 10-hour flight navigated by the rescue pilots.

Perils at the Pole

The first-ever midwinter landing at the South Pole, in 2001, was also for a medical evacuation: A doctor at the South Pole station became seriously ill with gallstones and pancreatitis. A Twin Otter aircraft, equipped with skis for landing on snow, was used in that rescue mission as well as in the current one. In addition to a minimum of moving parts, these planes can take off and land on short lengths of runway, according to "Amazing Flights and Flyers." [Extreme Living: Scientists at the End of the Earth]

Despite bad weather, the 2001 landing was relatively smooth — but takeoff proved a challenge. The hydraulically operated flaps on the Twin Otter froze, requiring unexpected and rapid repair right on the runway. After the flaps were moving again, the crew discovered that the plane's skis had frozen to the runway. Two maintenance workers had to rock the plane's wingtips from a perch atop a bulldozer to free the Twin Otter.

There have been other midwinter landings on Antarctica, including one to rescue an engineer with ulcerative colitis at New Zealand's Scott Base, near the Antarctic coast, in 1991. But given the risks, rescues are rare. In 1999, a doctor treated her own breast cancer at the Amundsen-Scott station, a process that included doing her own breast biopsy and treating herself with chemotherapy drugs airdropped by a plane. The doctor, Jerri Nielsen FitzGerald, was eventually rescued in October, early in the Antarctic spring, according to her obituary (she died in 2009 after a recurrence of her cancer).

In 2011, an engineer at the South Pole station had to wait two months for rescue after having a stroke. And in 2002, an anesthesiologist and an orthopedic surgeon in Boston helped the Amundsen-Scott station's only physician do knee surgery on a station meteorologist. The Boston doctors used voice- and video transmissions to guide the doctor through the repair of a damaged tendon, according to the NSF.