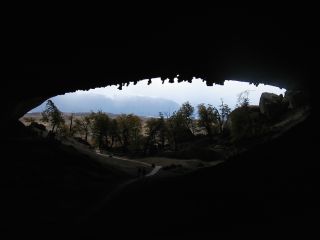 The Milodon Cave in Patagonia, where many of the bones in the study were excavated.
(Image: © Alan Cooper)

The saber-toothed cat, large ground sloth and other ice age giants of South America didn't go extinct solely because of climate change or prehistoric human activity, but because of a perfect storm of the two that hit the giant beasts at the same time, a new study finds.

For years, researchers have debated what felled many of the megafauna — animals that weigh more than 100 lbs. (45 kilograms) — shortly after the end of the last ice age. Some scientists blamed humans, who had newly colonized the Americas, while others pointed to the warming climate that followed the last ice age.

But now, research shows it was an interaction of the two that doomed the megabeasts. [10 Extinct Giants That Once Roamed North America]

"This explains why the two sides of the debate have been so vociferous — they were both partly right," said study leader Alan Cooper, director of the Australian Centre for Ancient DNA at the University of Adelaide in Australia.

The researchers used a combination of genetic data from ancient bones and temperature information from ice core samples to figure out the big picture. They sequenced the mitochondrial DNA (DNA passed down through the maternal line) of 89 megafaunal bone and teeth samples that were recovered from cave and rock shelters in Patagonia, the researchers said in the study.

Then, they used an advanced type of radiocarbon dating on 71 bone, teeth and coprolite (fossilized poop) samples, also from Patagonia. With radiocarbon dating, researchers can measure the amount of remaining carbon-14 (an isotope of carbon, or an element with a different number of neutrons in its nucleus) because they know the rate at which it decays. However, they can only do this for once-living organisms that are 50,000 years old or younger, although there are special methods for older specimens.

As the researchers were dating the specimens, they noticed that many of the carbon dates from the youngest specimens were from the same period, meaning they all died around the same time. A later analysis showed that these animals all died around 12,300 years ago, the scientists found.

"[This is] the first time we've had any idea of the timing of the South American extinctions," Cooper told Live Science.

Humans arrived in South America about 1,000 to 3,000 years before the megafaunal extinction, archaeological evidence suggests. However, these humans arrived just before a 1,700-year-old cold phase, called the Antarctic Cold Reversal, which lasted from about 14,400 to 12,700 years ago.

Only when the Antarctic Cold Reversal ended, and a rapid warming phase began, did the megafauna begin experiencing massive extinctions in South America.

"As soon as the cold spell stops, and the rapid warming phase starts after it, the megafauna are dead within a few hundred years," Cooper said.

Cooper immediately thought of the 2015 study he and his colleagues published on the extinction of North American megafauna. In that study, published in the journal Science, the researchers found that the mighty megafauna of North America largely went extinct because of rapid climate-warming events, called interstadials.

When temperatures rapidly increased, it caused dramatic shifts in global rainfall and vegetation patterns, which led to entire population die-offs, and in some cases, extinction, Cooper told Live Science last year. In contrast, temperature drops, such as from the last ice age, showed no association with animal extinctions.

The new study "confirms that rapid warmings are the causative agent of genetic upheavals — [such as] extinctions and replacements [of animal populations] — but this time we get to see it in high resolution," Cooper said.

When the South American climate warmed after the last ice age, it was likely challenging for the megafauna, the researchers said. But, when humans were thrown into the mix, it made the situation untenable for many megafauna, leading to their extinction, they said. [Wipe Out: History's Most Mysterious Extinctions]

That's because humans likely disrupted the animals' environments, with human societies and hunting groups making it difficult for megafauna to migrate to new places and refill areas once populated by animals that had gone extinct, Cooper told Live Science last year.

The 2015 study and the new study helped the researchers untangle the effects of climate change and human influence on the megafauna extinction within the Americas. That is, North and South America weren't always cold at the same time, and didn't always have human inhabitants at the same time, they found.

"The Americas are unique in that humans moved through two continents, from Alaska to Patagonia, in just 1,500 years," study author Chris Turney, a professor in the School of Biological, Earth and Environmental Sciences at the University of New South Wales, said in a statement. "As they did so, they passed through distinctly different climate states — warm in the north, and cold in the south. As a result, we can contrast human impacts under the different climatic conditions."

In addition, the researchers discovered several new animals that were unknown to Patagonia until now. By examining each fossil's genetic data, they found a distinct camelid species, a previously unknown group of guanaco and a genetically distinct giant South American jaguar subspecies.

"The ancient genetic data show that only the late arrival in Patagonia of a population of guanacos from the north saved the species, all other populations became extinct," study lead author Jessica Metcalf, an evolutionary biologist at the University of Colorado Boulder, said in the statement.

The new study disproves the idea of blitzkrieg, the concept that "a wave of advanced human hunters wiped out all megafauna in their path, due to [the animals'] naivety to humans and hunting," Cooper said.

He added that the 2015 study and the new findings show that rapid warming phases seem to be "major disruptive forces in the past, and quite possibly the present."

"Perhaps the last 1,100 years of human-caused warming may have been doing similar things to global animal populations, but we haven't been able to see it due to the impacts of primary human interaction, [such as] hunting, shooting, burning [and] general destruction," Cooper said. [Image Gallery: 25 Amazing Ancient Beasts]

The new study is an important one, said Ross MacPhee, a curator of mammalogy at the American Museum of Natural History in New York City, who was not involved with the new research.

"The point that they're making is a really substantial improvement in conceiving how these extinctions occurred," MacPhee said.

However, he noted that the researchers used ice core samples from western Antarctica and northern Greenland as proxies for the prehistoric climate in South America. But these ice core samples were "thousands of miles away from where the [fossil] data was collected," MacPhee said.

It's possible that the temperature changes weren't as dramatic in South America as they were in Antarctica and Greenland, he said, adding, "I'm not denying the effect, I'm simply questioning the scale of the effect."

The study was published online today (June 17) in the journal Science Advances.