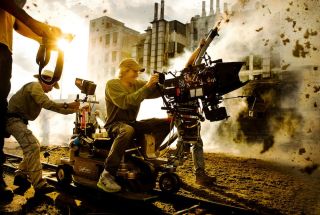 It looks like Michael Bay is jumping on the virtual reality bandwagon. The director, known for Hollywood blockbusters such as "The Rock," "Armageddon" and "Transformers," is joining forces with The Rogue Initiative, a production studio that specializes in creating interactive virtual reality experiences.

The partnership was announced today (June 15), with Bay and the Los Angeles-based studio saying they will create immersive virtual reality (VR) content that blends traditional storytelling in filmmaking with action sequences that viewers will be able to experience up close with VR tech.

The Rogue Initiative said it will produce "original content in cinematic-style VR," directed by Bay, bringing new dimensions to the director's filmmaking methods. [Beyond Gaming: 10 Other Fascinating Uses for Virtual-Reality Tech]

"I've enjoyed a long-standing relationship with Mr. Bay and couldn't be more excited to work with him and truly leverage his unique vision and incredible depth of experience to this amazing new medium," Pete Blumel, cofounder and CEO of The Rogue Initiative, said in a statement.

This will be Bay's first time creating interactive entertainment, but he's not the only one experimenting with how to incorporate virtual realty into the cinematic experience. At the 2016 Cannes Film Festival, in May, VR short films and presentations were presented in a special pavilion dedicated to the technology. Several animated VR shorts, including one called "Invasion!" and another called "Allumette," were screened at the film festival, demonstrating to audiences how the immersive tech could transform storytelling in the film industry.

The Rogue Initiative was launched earlier this year, and the production studio is working on a variety of VR projects for film and television. The studio has not yet announced when the VR experiences produced in collaboration with Bay will be available, or what devices and distribution channels will be compatible.