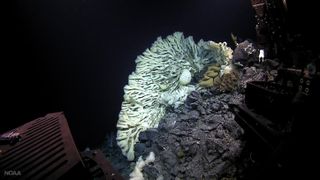 A sponge the size of a minivan, the largest on record, was found in 2015 during a deep-sea expedition in Papahānaumokuākea Marine National Monument off Hawaii.
(Image: © NOAA)

An unusual sponge was spotted making waves in waters near the Hawaiian Islands — though it doesn't wear square pants and is far too big to live in a pineapple under the sea.

The massive sponge — a marine animal with no skeleton and a soft, porous body — is the largest on record, researchers reported in a study. Identified as measuring approximately 12 feet (3.5 meters) in length and 7 feet (2.1 m) in height, the minivan-size creature was discovered at a depth of 7,000 feet (2,134 m) during dives by a remotely operated vehicle (ROV) system, which was deployed from the ship Okeanos Explorer by the National Oceanic and Atmospheric Administration (NOAA).

And according to the scientists, the sponge's unusual size could suggest that it might be capable of living for thousands of years. [The 12 Weirdest Animal Discoveries]

NOAA scientists published a description of their giant discovery on May 24 in the journal Marine Biodiversity, saying that the sponge's dimensions exceeded those of the largest specimens reported in earlier studies.

Previously, the largest known sponges were a colony of the species Aphrocallistes vastus, found in shallow waters near Canada and measuring about 11 feet (3.4 m) in length and about 4 feet (1.1 m) in height.

The solitary but sizable sponge was not a reef builder, the scientists noted in the study. They obtained a sample from a smaller specimen in a nearby location, which they suspected to be the same species as the giant sponge. But those were the only individuals of this type of sponge that the scientists encountered in the 18 ROV dives that were completed during the expedition.

There is much about sponges' life spans that science has not yet discovered. But very large sponges living in shallow waters have been estimated to live for more than 2,300 years, which hints that this giant — "and presumably old" — specimen could be equally long-lived, according to the study authors.

Sponges filter seawater, and an enormous individual such as this one likely plays an important role in preserving its ecosystem. Its discovery emphasizes the necessity of exploring deep-water environments, and how much still remains to be learned from them, the scientists said in the study.