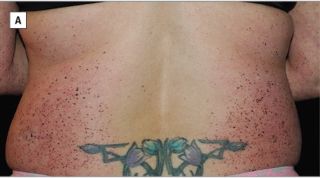 A photo of the symmetrical, demarcated moles across the woman's back.
(Image: © JAMA Dermatology. Copyright © (2016) American Medical Association. All rights reserved. )

It's not uncommon for people to notice a new mole on their skin every now and then. But when a 48-year-old woman developed thousands of moles on her torso and extremities in just a few months, doctors were puzzled, according to a recent report of her case.

The multitude of moles, which were dark brown and black, appeared over the course of six months on the woman's back, abdomen, legs and arms in a symmetrical pattern, the doctors at Massachusetts General Hospital who treated the woman wrote in their report, which was published May 18 in the journal JAMA Dermatology.

Indeed, the sheer number of moles was "unprecedented," said Dr. Hensin Tsao, a dermatologist who treated the woman and the senior author of the case report. [16 Oddest Medical Cases]

By the time the doctors saw the woman in March 2014, the moles numbered in the thousands, the report said. The woman also had developed eczema — an inflammatory, itchy skin condition — in the same areas where she developed the moles.

Although an explosion of moles — called eruptive nevi — is uncommon, it's not unheard of, Tsao told Live Science. In other cases, the condition has been linked to changes in hormone levels, certain medications or problems with the immune system, Tsao said. However, none of these causes could explain the woman's case, according to the report.

Tsao has seen other cases of eruptive nevi, but this woman's case stood out for several reasons. In other cases, for example, the patients' moles were more scattered over the body, he said. But in this woman's case, the pattern in which the moles appeared was unique: symmetrical and sharply demarcated, Tsao said.

The woman's eczema may be a clue. Because the eczema developed before the moles, it's possible that the moles are the result of an immune reaction, Tsao said. But "that's purely speculative at the current time," he added.

But strange moles can signal something more serious: melanoma. The doctors performed biopsies on several of the woman's moles, and some did turn out to be melanoma, a serious type of skin cancer, Tsao said. Rather than removing all of the moles, however, the doctors focused on the largest and most abnormal-looking ones, he said.

In addition, the woman was tested for internal melanoma, which can occur on internal organs in the body, Tsao said.

Tsao last saw the woman several months ago and noted that she is doing well. However, "she will probably need lifelong skin surveillance" to monitor for melanoma, he added.