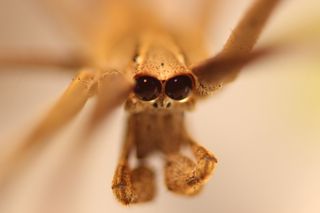 Net-casting spiders have the largest eyes of any spider.
(Image: © Jay Stafstrom)

Every night when the sun goes down, Florida's net-casting spiders emerge, startling onlookers with record-breaking, enormous eyes. Now, a new study shows that the two giant eyes among the spiders’ eight total peepers make the key difference in helping the spiders to see better at night, and zero in on prey walking nearby.

These findings confirm that spiders in the genus Deinopis, which have the largest eyes of any spider, use their humongous peepers to survive in the wild, said study lead researcher Jay Stafstrom, a doctoral student of biological sciences at the University of Nebraska-Lincoln.

The study also showed that the other six, small eyes don't provide much compensation in visual acuity when the large eyes are out of commission, Stafstrom said. [See Photos of Large-Eyed Net-Casting Spider]

Stafstrom decided to study net-casting spiders because little is known about them, he said. "They're pretty hard to find," he told Live Science. "During the day, they look like sticks, and at night they come out and do all of this cool behavior."

These spiders are also harmless to people, Stafstrom added. During all of his work with net-casting spiders, only one bit him, and that was after he captured it and carried it for 5 minutes in his hands on the way to the field station, Stafstrom said.

Net-casting spiders tend to live in subtropical areas, including most of Florida and southern Georgia, as well as Costa Rica. The arachnids eat small arthropods, including other spiders, ants, mosquitoes, moths and crickets — basically anything smaller than them (about the length of a person's ring finger), Stafstrom said.

Scientists had speculated that net-casting spiders, which spin a net-like web and use it to catch prey, use their massive eyes to hunt, but there was no actual evidence to prove it. So Stafstrom and Eileen Hebets, a professor of biological sciences at the University of Nebraska-Lincoln, set up two experiments to figure it out.

Stafstrom captured 29 Deinopis spinosa spiders and used a toothpick to paint a layer of dental silicone over each spider's two large eyes. He left the other six eyes of each spider untouched. Then, Stafstrom recorded the visually impaired spiders for the next 4 hours in the wild, noting what kind of prey they caught and how.

Overall, D. spinosa spiders with covered eyes caught less prey than did their counterparts who had full vision, Stafstrom found. Though the visually impaired spiders didn't have trouble catching airborne prey, like mosquitoes, they were less likely than their "all eyes on deck" counterparts to catch prey that was walking by them, he said. [5 Spooky Spider Myths Busted]

The so-called "walking prey" were significantly larger than the airborne prey, meaning the spiders with full-fledged vision could feast on larger prey in greater numbers than spiders with blocked vision, Stafstrom said.

The researchers did the same experiment again with 16 net-catching spiders, but in a 30-minute-long laboratory setting. The results were similar; the spiders with impaired sight were less likely to capture prey (in this case, crickets) than were the able-eyed spiders. It also took the eight-leggers with blocked vision significantly longer to capture the crickets, the researchers found.

The spiders' large eyes likely help them hunt at night, during low-light situations, Stafstrom said. As such, they can lay low during the day and evade predation by daytime predators, including birds, he said.

The study will be published online Wednesday (May 18) in the journal Biology Letters.