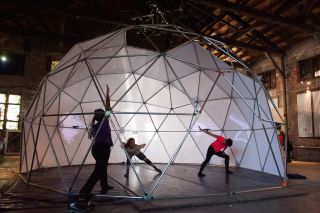 Dancers from the T Lang Dance company perform in the geodesic dome at the Goat Farm Arts Center in Atlanta.
(Image: © Courtesy of Georgia Institute of Technology)

If you love to dance, but fear that your partner might step on your toes, then a new virtual, computer-controlled dancer might be for you. And this virtual dancer may even teach you some new moves when you tango with it, a new project finds.

The computer-generated dancer — dubbed virtual artificial intelligence — is the brainchild of researchers at the Georgia Institute of Technology in Atlanta. The virtual dancer "watches" a person dancing, and then improvises moves of its own based on its earlier dancing experiences, the researchers said.

For now, however, the virtual dancer can only get jiggy with it in a 15-foot-tall (4.5 meters) dome, designed and built by Jessica Anderson, a master's student in digital media at Georgia Tech. Anderson and her colleagues presented the project to the public in Atlanta in late April.

"Co-creative artificial intelligence, or using AI as a creative collaborator, is rare," project leader Brian Magerko, an associate professor of digital media at Georgia Tech, said in a statement. "As computers become more ubiquitous, we must understand how they can coexist with humans. Part of that is creating things together."

The project, called LuminAI, uses Microsoft Kinect devices to capture the person's movements. These dance moves are then projected as a digitally enhanced silhouette on the dome's white, screened walls. Once the dancing starts, a brightly outlined virtual dancer appears next to them on the projection panels, the researchers said.

A computer dissects the person's moves, and, based on its memory of previous dances, decides the next move for the virtual dancer. So, the more LuminAI dances with real people, the better its moves become (so long as it's learning from talented dancers, that is).

"This episodic memory is filled with experiences of how people have danced with it in the past," said Mikhail Jacob, a computer science doctoral student and lead developer of the LuminAI technology. "For example, the computer learns to predict that when one person pumps their arms into the air, their partner is likely to do something similar. So on seeing that movement, the [virtual dancer] might pump its arms sideways at the same pace or use that as the basis for its response."

This improvisation is one of the project's greatest achievements, the researchers said. The virtual dancer can recognize patterns, but it won't necessarily react the same way each time. In this way, the its impromptu dance moves may even inspire the person, resulting in more creativity overall, the researchers said. [History of A.I.: Artificial Intelligence (Infographic)]

"Humans aren't fully in the driver's seat anymore. The process gives autonomy back to the computer," Jacob said. “LuminAI forces a person to create something new — potentially something better — with their partner because they’re forced to take their [virtual] partner's actions into consideration."

What's more, LuminAI shows that AI can learn all sorts of dance moves on its own, instead of relying on instructions from computer programmers, the researchers said. In a way, that sort of makes it human-like, which adds to the user experience, they said.