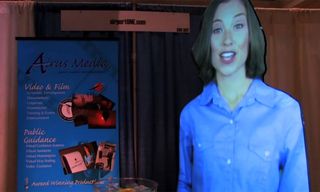 Travelers could find themselves facing life-size virtual avatars at New York City's airports as soon as this summer. Today's avatars exist as projected video images rather than as interactive holograms, but the next generation is expected to have the "brains" to directly answer people's questions.

The technology exists to make more interactive avatars that respond to airport traveler questions in multiple languages, said Patrick Bienvenu, CEO at AirportOne.com and creator of the "AVA" airport avatar. He envisions AVA's next generation answering questions such as the location of departure gates and departure times for certain flights.

AVA avatars already exist at airports in London and Dubai as project images on person-shaped glass, according to MSNBC's Travel Kit blog. But the avatars at New York airports would mark AVA's first North American debut.

Such avatars could catch on far beyond airports if they prove successful. The Florida-based Airus Media, Inc. (owner of AirportOne.com) hopes its avatars can become virtual assistants, mannequins or presenters for stadiums, convention centers, train stations, subways, shopping centers and museums.

The Port Authority of New York and New Jersey plans to install the virtual avatars sometime in early July.