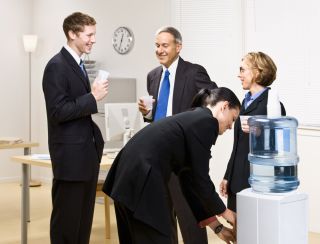 Thousands of people in Spain were recently sickened with a virus spreading from an unlikely source: bottled water. But how does a virus find its way into the exact product that people usually drink to avoid getting sick from a local water supply?

Yesterday (April 25), the health department in Catalonia said that more than 4,100 people in the region came down with vomiting and diarrhea, symptoms of the notorious "stomach bug" called norovirus, between April 11 and April 18. The illnesses were linked to contaminated office water coolers that were distributed to hundreds of companies in the cities of Barcelona and Tarragona.

Norovirus is a common cause of foodborne illness outbreaks, and it can also contaminate drinking water, such as water from private wells, according to the Centers for Disease Control and Prevention. But this is the first time that norovirus has been found in bottled water, Albert Bosch, a microbiology professor at the University of Barcelona, said in a statement.

It's possible that norovirus contaminated the water at its source where it was bottled, said Benjamin Chapman, an associate professor and food safety specialist at North Carolina State University, who was not involved in the investigation. In this case, the spring water was bottled in Andorra, a small country located in the Pyrenees mountains between Spain and France. [Top 7 Germs in Food that Make You Sick]

Norovirus is spread through fecal matter, and in past outbreaks, drinking water became contaminated when sewage leaked into the water source, Chapman said. Given that the recent outbreak in Spain was so large, with hundreds of bottles affected, "it's more likely that it would be source contamination," as opposed to contamination at some later point in the bottling process, Chapman said.

Still, it's also possible that the water was contaminated at the manufacturing facility. Norovirus is a very hardy virus, Chapman said, and if someone with the illness vomited at a bottling facility, this could contaminate equipment used for bottling the water, Chapman said.

In theory, many kinds of bacteria and viruses could get into bottled water if the water is contaminated at its source. "Water is a really good source of pathogens," Chapman said. It's important to conduct proper testing on water to look for potential pathogens and prevent outbreaks, Chapman said.