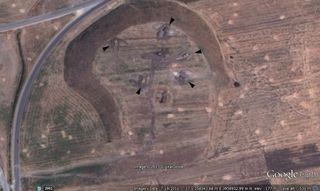 Military tanks can now be seen inside bunkers carved into the ancient mound called Tell Qarqur in Syria. The mound was once the site of an archaeological expedition.
(Image: © Google Earth)

"Antiques" with a declared value of $26 million have been imported to the United States from Syria since 2011, when the civil war there began, according to documents that the U.S. Census Bureau provided to Live Science.

It's not clear what, exactly, the antiques actually are, nor whether the items were illegally brought here or where the money from any sales is going. Their age is also unclear. In most cases the documents say only that they are "antiques" that are more than "100 years old," although occasionally a shipment of coins is identified.

The documents say that the bulk of them are brought to New York City where numerous antiquities dealers, art galleries and auction houses are based. Whether or not the antiques are resold after arriving in New York is unclear. [Photos: See How War Is Damaging Syria's Castles and Landmarks]

The imports are drawing concerns because Syria's archaeological sites have been heavily looted during the war, and some of them now lie in territory controlled by terrorist groups such as the Islamic State group (also called ISIS) and the al-Nusra Front (which is allied with al-Qaida).

U.S. Customs and Border Protection officials told Live Science that privacy laws prevent them from releasing documents with more details on the imported goods. They declined to reveal how often shipments of antiques imported from Syria and Iraq are inspected, only saying in a statement that audits are sometimes done.

The documents reveal that "antiques," not oil, are now the largest Syrian export to the United States. The documents also reveal that, since 2011, "antiques" with a declared value of over $12 million have been imported to the United States from Iraq, a country that has been enveloped in the Syrian civil war.  [5 Surprising Cultural Facts About Syria]

The bulk of the imports, according to the documents, were sent to New York City, although there were some interesting exceptions. For example, in August 2013, a shipment of Iraqi "antiques," with a declared value of $3.5 million, passed through customs in San Juan, Puerto Rico. The contents of the shipment, the importer and the reason it was sent to Puerto Rico are all unknown. More details about this shipment may be available but privacy laws prevent it from being released.

A bill that would curtail the importation of Syrian antiquities to the United States is before Congress, but it is uncertain whether it will pass and be signed by President Barack Obama before the 2016 election.

Syria's civil war has been raging for over five years. During that time, the country's economy has collapsed and is now a haven for several terrorist groups. Looting of the country's archaeological sites is widespread, and the funds from the sale of looted artifacts are used to help finance the purchase of weapons and munitions, according to numerous archaeologists, government officials and media reports.

In a series of blog posts in January and December, Rick St. Hilaire, a lawyer with Red Arch Cultural Heritage Law & Policy Research, raised concerns that some of the "antique"imports could be looted artifacts.

"The data show that there is enough reasonable suspicion to ask questions about what is inside those shipping crates passing into the U.S.," St. Hilaire told Live Science. "While the data does not reveal enough information to tell us key facts we need to know, it certainly tells us that we need to invest the necessary resources to discover exactly what cultural property is coming into the U.S., who is importing it, how many objects are coming in, where exactly is it from and how much is it really worth."

Last year, Rep. Eliot Engel, D-N.Y., introduced a bill that would curtail imports of antiquities from Syria. The bill has passed through several committees and has been amended heavily. It's uncertain whether Congress will pass the amended bill before the November 2016 election. Shortly after the election a new Congress will take over and the process of putting forward the bill may have to start over. The website govtrack.us gave the bill only a 17 percent chance of passing.

Meanwhile, the Russian ambassador to the United Nations has sent a letter to the U.N. Security Council claiming that the Islamic State group is making between $150 million and $200 million a year from the sale of looted antiquities. The ambassador says that towns in Turkey are being used to smuggle artifacts out of Syria, where they eventually reach buyers on the global market (not just the United States).

The Russian ambassador's claims have not been independently verified. However, the U.S. Department of State agrees that the Islamic State group is making a substantial amount of money through the sale of looted antiquities.